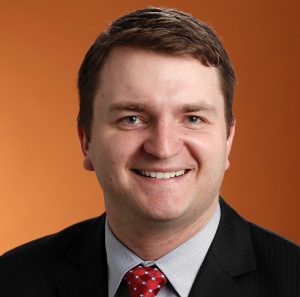 Scott Stahl of Emery said he chose farming as a profession because it provides an opportunity to work with his family.

“It is a true blessing for my wife and me to raise our boys on a farm,” Stahl said. “I enjoy the feeling of watching things grow and I am humbled to be a steward of God’s creation. And I enjoy being able to be a small part of feeding the world.”

A third-generation family farmer from western McCook County, he farms with his dad, Charles. The farming operation consists of corn, soybeans, oats, a calf-cow operation, a feedlot and custom fertilizer spreading. Scott bought his first farm in 2006 and started farming full time in 2013. He worked at The First National Bank in Sioux Falls from 2007-13.

Stahl is a graduate of Bridgewater High School and Northwestern College in Orange City, Iowa, where he earned a degree in business finance and agribusiness. He said the most important issue facing today’s corn farmers is maintaining positive margins in an increasingly competitive global supply-and-demand market.

Stahl is a member of the Syngenta Agri-Edge Advisory Board, attended the Farm Credit Young and Beginning Farmer Conference, is a Pioneer Next Generation Producer and serves on the Northwestern College AgriBusiness Department advisory board. He also serves on his church board, is an Awana leader, and is a member of the Bridgewater-Emery School Foundation Board.

He and his wife, Amanda, have five children: Landon, James, Harrison and twins Camden and Caroline. He likes to spend his spare time with his family, reading and golfing.