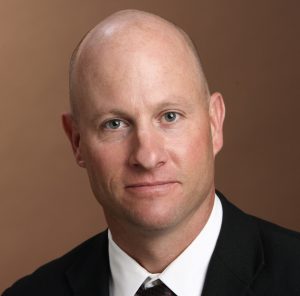 Chad Blindauer of Mitchell has spent many years working on behalf of the state’s corn farmers.

Blindauer first served on the South Dakota Corn Growers Association’s board of directors from 2001 through 2009, including a term as president. Then, he joined the South Dakota Corn Utilization Council board in 2008 and served six years, including a presidential term. In 2020, he rejoined the Council board, representing District 8, which encompasses Davison, Hanson, McCook, Hutchinson, Douglas and Bon Homme counties.

His service goes beyond the state level as he spent six years on the biotechnology action team for the National Corn Growers Association and served as the team’s chairman.

Blindauer says he chose farming as a profession because he enjoys being outdoors and likes the challenges that farming gives him. He started farming with his dad Don in 1991, and now Chad’s son Kane is involved with the operation. They raise corn, soybeans, wheat and cattle on the family farm.

The economic challenges that farmers face are a big concern, he says.

“The biggest issue, by far, is our incredibly tight margins. Given our current commodity prices, thanks to tariffs, the coronavirus and everything else, marketing opportunities are incredibly difficult. That, in turn, makes the bottom line extremely tight. rying to stay above our break-even is our biggest challenge.”

In his spare time, Blindauer likes to watch baseball. He and his wife, Kristy, have three children: Alexis, Kane and Devin.