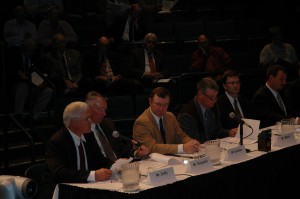 A number of issues were addressed at the U.S. Ag Committee’s Farm Bill Hearing held on the Augustana Campus in Sioux Falls on Tuesday morning. South Dakota Corn Growers Association President, Gary Duffy, testified in front of the committee touching on a majority of the topics.

“Federal Crop Insurance is the greatest risk management tool producers have. No one knows what Mother Nature is going to do. Crop insurance is efficient and effective for all crops.”

“The Conservation Security Program is a step in the right direction. South Dakota has the fifth highest enrollment in the program…Producers are very aggressive stewards of the land, and this program has awarded them for their efforts. “

Wind energy, cellulosic ethanol and broadband internet were discussed as additional ways to assist in the development of rural America. South Dakota is behind in wind energy compared to its neighboring states, but holds great potential.

It is widely noted that the average age of the American Farmer is 57. Both the panel and Ag Committee showed their concern and realize more needs to be done to address this issue. Ensuring that young people can strive and prosper in agriculture is vitally important to all rural communities across America.

South Dakotans provided direction for what the next farm bill should look like when the U.S. House Agriculture Committee held a field hearing on the 2012 ...

The animal rights group, PETA (People for Ethical Treatment of Animals), claim to be negotiating with billboard companies to install the sign above ...