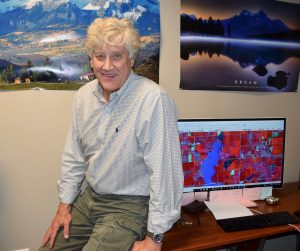 Satellite imagery is an incredibly useful and important tool for farming. However, there’s one problem: cloud cover and smoke from fires can obscure details on the earth’s surface.

The founder of a new, innovative company that’s based in Sioux Falls says he has found a solution.

Groeneveld developed this technology and refers to it as the company’s “secret sauce.” He said it’s a game changer because it can be used for high-resolution (3-meter) data that have daily satellite overpasses.

“Nobody in the world has this but us,” he said.

The clear satellite images and the information that can be collected from them and other sources can be used in multiple ways. Groeneveld’s primary application is to help crop insurance companies do a very accurate, efficient job of determining losses, in turn ensuring that farmers receive their payments much quicker.

One need that ARSI is tackling is to develop a method to determine the probability that a prevented plant claim is valid. By using topography and past rainfall totals, the company can look at huge regions, extract information for every common land unit, put all claims in one file and rank the claims. Fields with the least probability of being wet are the ones crop insurance companies should measure first to show why there’s a need for the claim.

A ranking of claims can reduce the amount of labor needed while also speeding up the process. The company can determine the degree of loss across a field whether it’s caused by flooding, hail, tornadoes or wind. His company is currently working with a major crop insurance group. If the technology and data can increase efficiency, it can help with crop insurance and farming.

Groeneveld said one of the biggest challenges farmers face in prevented planting claims is getting credit for smaller areas that are damaged. That’s because of the 20/20 rule, which states that a minimum of 20 acres or 20 percent of a unit must be affected.

“The only reason the 20/20 rule came out is because the claim load was so high,” Groeneveld said. “What if we were able to automate analyses to evaluate the claims? We could take that down to 5/5 and all farmers would benefit.”

He said the potential uses for the satellite imagery are vast. It can be used to show variability in soil; it can determine which of a farmer’s fields are driest and should be harvested first; it can plot growth curves over years for comparison; it can identify problem areas in fields, such as early stage pests and disease; and can detect and map the effects of dicamba and other herbicide drift.

“What we want to do is provide farmers with simple, actionable data,” he said. “If it’s not actionable, why would a farmer care? I keep seeing ag make this mistake; they give farmers high-tech data they can’t interpret and they don’t know what they can do with it.”

ARSI’s technology is also being used in a study of rising water tables being done by the South Dakota School of Mines and Technology and South Dakota State University.

Some of the data and services ARSI can provide won’t be available commercially for another year because of a no-compete clause Groeneveld signed when he sold a previous ag software business, Hydrobio, to The Climate Corporation, a subsidiary of Monsanto. That company was focused on irrigation and water use for crops.

Groeneveld, a 67-year-old Illinois native, has a bachelor’s degree in botany, a master’s in plant ecology and a doctorate in distributed hydrology and plant biology. He said he moved from New Mexico to South Dakota in May 2017 because he loves to hunt and fish, but with an eye for business. He now lives close to farming for inspiration, to South Dakota universities for staff and to the EROS Data Center, a mecca for satellite data users through the Landsat program.

To help launch ARSI, Groeneveld made connections with the South Dakota Small Business Development Center and the Governor’s Office of Economic Development. He filed his South Dakota corporation paperwork in March 2018.

Groeneveld didn’t have to go far to build his team. He hired South Dakota State University graduates Tim Ruggles to do programming and Roni Farhad and Nahid Hasan for research and development. Victoria Karnes, a graduate of the School of Mines and Technology, is his global information system specialist. In addition to EROS data, the staff also uses information from the National Oceanic and Atmospheric Administration, European Space Administration and commercial satellites.

Ruggles explained that the technology allows him to do calculations that can determine the precipitation departure from normal for any person’s field. They can pull information from 500 weather stations and expect to add another 100. He and Groeneveld pulled up satellite images showing an area covered with smoke from a Canadian fire. Then they pulled up clear images of the identical area, corrected pixel by pixel – 120 million pixels in this particular image. They said it took one minute to process, providing clear imagery.

“We couldn’t do this 10 years ago,” Groeneveld said. “Now there’s so much available data we can pull in to allow us to move quickly.”

ARSI also works with a team in Bangladesh for programming and problem solving. A person in Portugal helps with software and solutions.

A big challenge was to gain traction in working with crop insurance companies. In the past, remote sensing has been oversold and underdelivered, and the industry is skeptical, he said. So Groeneveld turned to a previous contact, Tim Hoffman, a South Dakota native who served 25 years as a director of product administration and standards division for the Risk Management Agency. Hoffman, who retired from RMA, became a partner in the company.

ARSI won the Governor’s Giant Vision Award from the South Dakota Chamber of Commerce earlier this year. Less than a year after forming, the corporation “is using federal money to make things happen to benefit farming – bringing it home to South Dakota.”

Groeneveld has plans to grow the company and expand its services. He says timing has played a role in his success, using a surfer analogy: “if you catch the wave too early, you’re crushed by the wave. If you’re too late, you don’t catch the wave. I think we’re on this wave just right.”