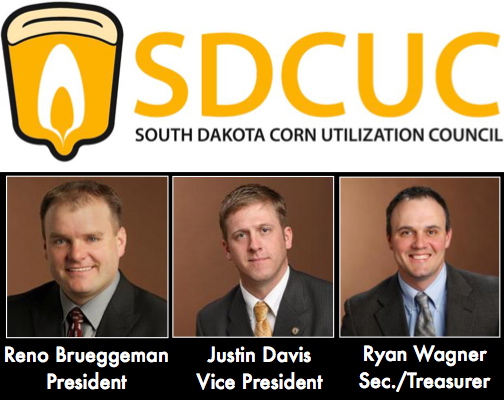 The South Dakota Corn Utilization Council (SDCUC) has elected fourth-generation farmer Reno Brueggeman of Miller as president.
The board of directors also elected Justin Davis of Ipswich as vice president and Ryan Wagner of Roslyn as secretary/treasurer.
Brueggeman joined the SDCUC board of directors in 2013. He and his brother are involved in a fourth-generation, diversified farming operation. They also own and operate Brueggeman Crop Services, a Channel seed dealership and crop insurance agency. He also serves as clerk on his township board.
Davis has served on the SDCUC board since 2011. He raises corn, soybeans and wheat on his farm, and also farms with his father and brother. He served in the South Dakota House of Representatives six years and is a member of the Ipswich School Board.
Wagner joined the SDCUC board in 2014. His family’s farm has been 100 percent no-till since the late 1980s. He participated in the South Dakota Agricultural & Rural Leadership program, is a commodity broker and serves as president of his church council.
The SDCUC is responsible for the collection and administration of a one-cent-per-bushel corn check-off program. Money raised through that program funds research and development of new uses and markets for corn and corn byproducts that benefit South Dakota economically and environmentally.