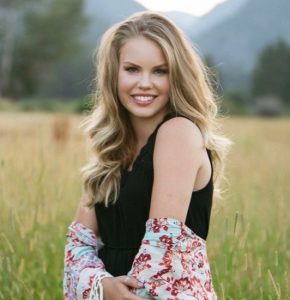 Grace Brose of Box Elder, a senior at New Underwood High School, won a National Ag Day essay contest organized by the Agricultural Council of America. She won a $1,000 prize and a March 14 trip to Washington, D.C., for recognition at the National Press Club. Contest sponsors were CHS Inc., National Association of Farm Broadcasting and Farm Progress. Grace, whose grandparents and great-grandparents have been involved in agriculture, is active in student council, National Honor Society, band and drama. This is Grace’s winning essay.

There’s a little boy, out in the front yard with a beat-up toy truck, filling the back end full of dirt, only to dump it all out and start over again. Pretty soon, that little boy is a teenager and he finds himself trying to rock an old Ford out of a rut, thinking he may have underestimated how much it rained last night. In the blink of an eye, he’s a newlywed, breaking ground on a two-bedroom, white picket fence dream. He’s ready to plant some roots. Well, now that little boy is an old man, and in his two hands, you can see years of hard work and sacrifice. Every blemish is its own story. Those hands are strong enough to plow and plant, and sweat and bleed, yet gentle enough to raise a family.

This is the story of farmers and ranchers across the country. This is the story of generations of my family, the reality of my fellow rural Midwesterners and a great source of pride. That cannot end the story, though. The world population is ever-growing, and those old men cannot till and plant forever. Now is the time for my generation to step up and step in because agriculture is more critical than ever.

Global population growth is not slowing down, and I am not exaggerating when I say being able to feed that population is paramount to sustaining life on Earth.

Agriculture is a science. Like any science, it is continually changing. It is no longer just 80 acres and a dream. It is precision ag, genetically modified organisms, cover crops, no-till techniques, innovative pesticides and more! Innovations in technology, transportation, architecture and even medicine mean nothing when people are dying of starvation.

Global population growth is not slowing down, and I am not exaggerating when I say being able to feed that population is paramount to sustaining life on Earth. The Midwest, the United States and the entire globe must realize the importance of modern agriculture.

I am infinitely proud of the life my family has been able to build through the generations. I am proud of a farmer who will spend several months and thousands of dollars tilling the ground, planting his crop and watching it grow, only to have it blown away in a storm a few weeks before harvest.

I am proud of a rancher who will be up multiple times in the night during calving season to check on the cows but still shed a tear watching a mama cow lay beside her stillborn calf. Most of all, though, I am proud that one day, I will be able to combine the traditions of my family with the needs of the world. That, indeed, is something beautiful.

Two organizations that represent South  corn farmers have elected officers for the following year. The South Dakota Corn Growers Association board of ...

Two join SDCGA board of directors

The South Dakota Corn Growers Association has added two new members to its board of directors. Dave Ellens, 33, who farms near Wentworth, represents ...