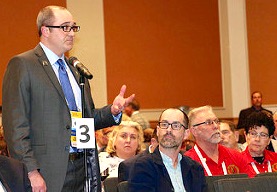 The interim CEO of the National Corn Growers Association is at no loss for words when he’s asked about the contribution Keith Alverson of Chester made during two terms on the NCGA board of directors.

“Thisis my third ag trade association in a 30-year career, and I just haven’t run into many people who have as complete a package as Keith Alverson,” Jon Doggett says. “He’s smart, thoughtful and speaks up when needed.”

Alverson will complete his second and final three-year term on the national board next month. South Dakota’s lone representative on a 15-member board, he gave a farewell address in July during the annual Corn Congress gathering in Washington, D.C.

Doggett, who took over as interim CEO after Chris Novak became president of CropLife America, says the NCGA counted on Alverson a lot because he’s so good at so many different things.

“Keith is one of my favorite people; I’m really going to miss him. A lot in our organization will miss him,” Doggett says. “They don’t come any better than Keith Alverson; they really don’t. South Dakota ought to be very proud.”

Alverson, a sixth-generation farmer, says serving on the national board was an opportunity to interact with thoughtful, positive people.

“It was just incredible. It was a fun atmosphere to be a part of and really rewording work,” he says. “I got to work with such great people – optimistic problem solvers. It seemed like I learned something new every day. It was a neat experience.”

That experience included promoting corn and agriculture, and working with trade, ethanol and stewardship issues. He was able to be involved in launching the Soil Health Partnership, a farmer-led initiative that fosters transformation in agriculture through improved soil health. He says it was fulfilling to envision what that project could become and then see it exceed initial expectations.

Through the involvement with the NCGA, Alverson says his appreciation for trade and related matters peaked. He says the experience helped him pick up leadership skills from others. He interacted with people from other states, and they all shared a passion for agriculture.

“We’re all corn farmers. We all have the same mission, but there’s a rich history everyone can bring. There are different perspectives,” he says.

His involvement included serving on the NCGA Ethanol Committee for three years, where he became chairman. In addition to serving on the national boards, Alverson is also on the South Dakota Corn Growers Association’s board of directors, which has kept the father of three quite busy.

Lisa Richardson, South Dakota Corn’s president, says Alverson was a perfect fit for the NCGA board. Through his service with the state board, he demonstrated exceptional leadership skills as well as knowledge and vision that are vital to a board’s success. Alverson is a past president of the SDCGA and also served as a South Dakota Corn Utilization Council director.

“Keith is visionary, enthusiastic and decisive. He’s intelligent and well-respected,” Richardson says. “He has a strong work ethic, a positive attitude and excellent leadership instincts. Most of all, he is remarkably dedicated to the betterment of the ag industry.”

Although Alverson is leaving the national board, Doggett says he’s certain he’ll stay involved in the promotion of agriculture. “He’s always there to do the best he can for the industry.”

Give us trade, not aid

As the United States continues to spar and negotiate with its trading partners, the message from rural America grows louder and clearer: Farmers want ...