SIOUX FALLS – Tommy Grisafi has a name for the record high price of corn in 2018.

“I call $8 corn the devil because it distorted what’s real,” the Advance Trading commodity risk management adviser said during the 33rd annual meeting of the South Dakota Corn Growers Association. 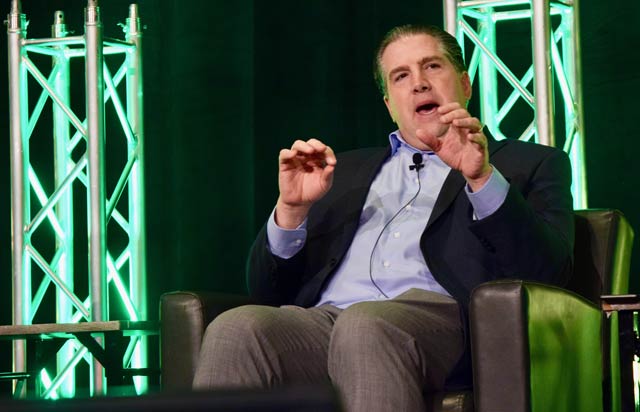 Grisafi was part of a strong lineup of speakers who grabbed the full attention of a large audience with their presentations about grain marketing, weather, trade, policy and transportation at the Jan. 19 event. He teamed up with Ed Duggan of Top Third Ag Marketing to form a two-man marketing panel, moderated by Delaney Howell, host of Market to Market.

Grisafi added a little historical perspective to his presentation, referring to Earl Butz, the secretary of agriculture under Presidents Nixon and Ford, and the secretary’s decision to abolish a program that paid corn farmers to not plant all of their land.

That policy change was a contributing factor in the nation’s increased crop production, which has resulted in surpluses of corn and soybeans. An oversupply has forced farmers to deal with low commodity prices in recent years.

“Warren Buffet always says you never know who’s naked in the water until the tide goes out,” Grisafi said. “Last year, all soybean farmers were naked.”

Already-low soybean prices dropped further as a result of the trade war with China. Grisafi credits President Trump for taking on China, pointing out, “For many years they walked all over us.” However, even if the two countries do reach a trade agreement, he wonders because of the outbreak of African swine fever whether China will ever get back to importing as many soybeans as it once did. On the other hand, they may need corn, particularly if they hold firm in their recent commitment to use more ethanol.

Grisafi said he believes price will always be a problem for farmers, whether it’s the price of grain they sell or the price of inputs.

Duggan chimed in about low prices.

To get through challenging times, farmers need to make sound decisions.

“You guys are the greatest in the world at what you do – producing a crop,” Duggan said. “But how many of you do any marketing? Spend five minutes a day. Call your elevator and check your basis.”

If the basis changes enough, sell some, he advised.

Duggan said he doesn’t believe there will be as large of an increase in corn acres as has been predicted. 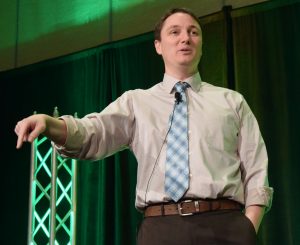 Eric Snodgrass, co-founder of Global Weather and Climate Logistics, had the audience laughing and captivated with his presentation on a topic that some consider dry – weather.

Mixing in humorous video clips and pictures, Snodgrass packed in a ton of information. He advised farmers that the best way to use weather information is to make near-term decisions, not be speculative with it.

“If you use weather information to plan your operations on a 7-to-14-day time scale, you can minimize bad decisions and maximize efficiency and effort,” he said.

Snodgrass noted that the United States has either tied or broken corn and soybean yield records every year since 2013. But no one can predict whether that trend will continue.

He recalled that he was at a gas station near Chicago when an older man in front of him bought a large number of tickets for the Mega Millions lottery, which had a $1.6 billion jackpot at that time. The man said he had been playing 35 years and added, “I’m due.”

Snodgrass shook his head at that reasoning.

“Most people I talk to think there’s no way 2019 can be the seventh consecutive huge year for both yield and production. The case I want to make is nobody knows,” he continued. “Historically, if you decompose a time series of yields against trend, you will not be able to find a cycle to it. That’s because the way weather changes is chaotic and nonlinear. It’s perfectly possible 2019 has a huge banner year for yields. At the same time, you could have it go the other way.”

Snodgrass said when he’s asked where agriculture is changing the most, the answer is simple: in the Dakotas, where the growing season has increased and rainfalls have become more frequent. He noted that Fargo, N.D. has added 30 days to its frost-free season.

A 3-member panel covered the timely topics of trade, policy and transportation to wrap up the education session.

Addressing trade agreements, Gaibler said Japan doesn’t appear to be in any rush to complete a bilateral deal with the United States. He believes Japan would prefer that the U.S. join the Trans-Pacific Partnership, which currently has 11 countries as members.

Gaibler said the potential of ethanol exports is highest in southeast Asia, where growth will occur. 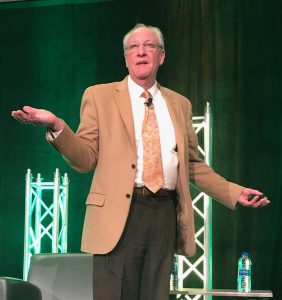 Greg Guthrie, director of marketing for BNSF Agricultural Products, said one-third of what BNSF carries is coal, which he noted is a dying industry. Agricultural products account for only 9-11 percent of the railway’s volume. However, the volume of ag products has grown four consecutive years, and so has the volume of grain. In South Dakota and the northern tier of the railroad system, ag products account for 25 percent of total volume at any one time. In 2018, BNSF moved 55,000 loads of South Dakota corn, compared with fewer than 29,000 loads in 2017.

About 65 percent of BNSF grain shuttles originate from South Dakota, North Dakota, Minnesota and Montana. Two-thirds of those shuttles go to the Pacific Northwest. Guthrie said BNSF invested $6 billion in the northern corridor from 2013 through 2017.

“Our objective is to get grain wherever it needs to go,” he said.

Looking at markets for grains and by-products in 2918, there were ups and downs. China reduced its imports of soybeans and U.S. corn use for ethanol has stagnated. However, U.S. corn exports were exceptional despite strong competition from Argentina, Brazil Ukraine and South Africa.

Hofer said there will be a huge opportunity to get more products into China if that country and the U.S. work out a trade agreement. Right now, there’s a lot of uncertainty.

“We’re trying to find the best markets for those products,” Hofer said, “and move them most efficiently.”

Agriculture Is the Lifeblood of South Dakota

What would South Dakota look like without the agriculture industry? It would be vastly different than the state we have today, from the smallest towns to ...

When the Tru Shrimp Co. announced in early January that it will build a shrimp production facility in Madison, it was a bonus not only for the city but ...