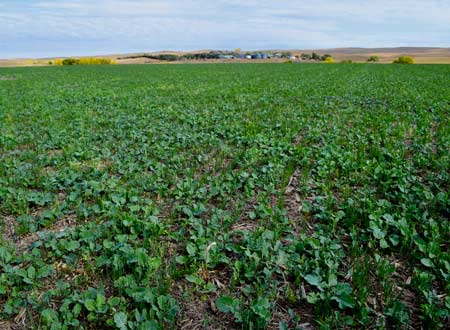 Drive around rural South Dakota during the growing season and you’re likely to see some turnips, radishes and rye.

Those statistics and others reflect a growing commitment to on-farm conservation practices. The number of no-till acres climbed to 7.66 million–half a million more acres than in 2012. In addition to no-till, the number of reduced-tillage cropland grew to 4.3 million acres, a 24 percent increase from 3.46 million in 2012.

Although the heaviest concentration of no-till acres is along the Missouri River and in the state’s central counties, the practice has expanded in a number of eastern counties such as Roberts, Brookings, Lake, Clay and Union, said Jeff Zimprich, state conservationist with the South Dakota office of Natural Resources Conservation (NRCS).

“We are seeing more no-till across the state,” Zimprich said. “Farmer by farmer, neighbor by neighbor… they’re seeing the benefit of no-till systems, especially when they combine them with all other practices.”

No-till systems were being used on 45 percent of South Dakota cropland in 2017 compared with 22 percent mulch till, 17 percent reduced tillage and 16 percent conventional tillage, according to the NRCS.

No-till is touted for its moisture-retention benefits during dry weather or droughts, but Zimprich said it’s also beneficial when we have high levels of precipitation like South Dakota experienced last year and again this year because it creates good soil structure and provides better infiltration. He said he believes the farmers who were able to get some field work done early in this wet spring are those who have good soil structure.

At Southeast Research Farm, Peter Sexton said they were able to plant oats on no-till ground in April despite the wet weather.

Sexton said they were unable to plant on a piece of ground that had been tilled, but were able to plant on the no-till ground because it is structurally stronger and holds equipment up. That’s a benefit for soil sampling, fertilizing and planting, he said.

While it’s true that soil is a couple of degrees cooler on no-till ground than in a tilled field in late-May or early June, Sexton said there’s not much difference once the crop canopies. Besides, lower temperatures are better in August when corn is maturing.

Grant Rix of Groton said there hasn’t been much change in tillage practices in his part of the state during the past few years, although there is probably more minimum tillage than there was a decade ago.

His family farm had been no-till since the early 1980s but switched to minimum tillage six years ago. A primary reason for the switch was that no-till fields had gotten rough during the course of several wet years. Through minimum tillage, they were able to smooth the ground. The change had also helped control weeds and incorporate fertilizer, said Rix, who is secretary/treasurer of the South Dakota Corn Utilization Council.

The region around Groton has diverse soil types, with sandy ground to the north and a lot of clay where the Rixes farm. Most farmers who were doing heavy tillage years ago still do, Rix said.

He and his family have planted some cover crops on barren ground and plan to do some again this year on “prevented planting” acres.

The USDA’s National Agricultural Statistics Service conducts a Census of Agriculture every five years and released the 2017 census in April. Here are some other South Dakota statistics from the report.

As expected, South Dakotans stored a lot more soybeans last year than they did in 2017. Saddled with low prices, many farmers decided to hang on to their ...