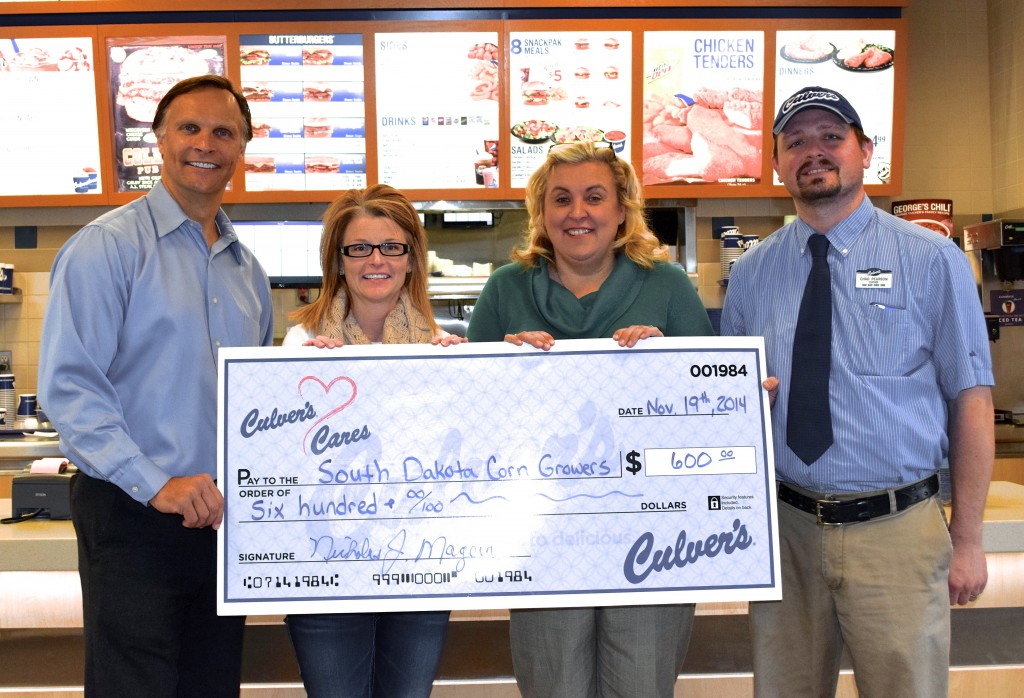 Customers and employees at Culver’s restaurants in Sioux Falls have raised $600 to support and promote South Dakota farmers.

Culver’s representatives recently presented a check for that amount to South Dakota Corn, which will use the money to help tell farming’s message. Nick Magera, president of Sioux Falls’ four Culver’s restaurants, said there are two main reasons the company has such a strong focus on farming.

“First of all, farming is the backbone of our economy,” Magera said. “Second of all, we use so many products in our restaurants that come from the farm that we feel like we’re partnering with the farmers to bring our business to life. We couldn’t do it without them.”

Chad Pearson, Culver’s operations manager and part owner, said the money was collected during a one-month period in coin boxes that were on display in the restaurants. Guests and workers deposited extra change in the boxes.

The collection was held in conjunction with a Culver’s national “Thank You, Farmers” campaign. That national promotion developed as a result of a successful campaign that started in Sioux Falls several years ago when local Culver’s restaurants partnered with South Dakota Corn on a frozen-custard giveaway during National Ag Week.

The farmer promotion grew into a statewide campaign and caught the attention of the Culver’s headquarters, which expanded it to a national level, Pearson said. The campaign also has raised money for FFA programs.

“Culver’s has done an awesome job in promoting and supporting agriculture, which is South Dakota’s No. 1 industry,” said Teddi Mueller, Corn Utilization Council industry affairs director. “We appreciate all they do and thank them for their commitment to farmers.”

Meeting the growing demands for food, feed, fuel and fiber is something that America’s farmers have been accomplishing for decades. But with human ...

Vote for your favorite #SDharvest14 photo