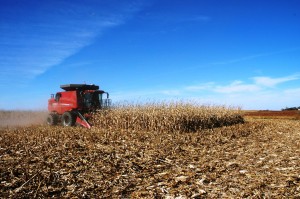 In case you missed it, an article Tuesday from Bloomberg’s Jeff Wilson detailed the headline, “Rising Corn Acreage Seen Failing to Meet Increased U.S. Feed, Ethanol Use. “Mr. Wilson is discounting the ability of American farmer before the most even get a chance to put a seed in the ground. What makes his case even worse is that he expects supply to fall short of demand with a large increase in corn acreage.

Wilson cites increasing demands from ethanol and livestock as the reason for the farmer’s projected failure. But someone might want to remind Mr. Wilson that farmers have been meeting increased demands since the beginning of time. As the world’s population has continued to rise, so has our farmer’s productivity. Today, a farmer feeds an average of 155 people per year compared to 73 people per year in 1970.

Wilson goes into short detail that nearly 40% of our corn supply will go towards corn ethanol production but fails to mention that 1/3 of that 40% will come back in the form of distiller’s grains, a high-protein livestock feed which displaced the need for one million bushels of corn in the United States during 2010 with overall production at around nine billion metrics tons. Ethanol production only removes the starch from the kernel allowing for the rest of nutrients to be fed as a replacement to corn.

Technology like precision agriculture and advanced seed genetics has allowed famers to double their corn yields in the last 20 years on less land as there is currently around 32 million acres out of production in conservation reserve programs.

As farmers continue to increase their productivity, they have also increased their environmental awareness during the last 20 years as precision agriculture has decreased emission per bushel by 30% and decreased energy use per bushel by 37%. Practices like no-till have reduced runoff and erosion and innovative fertilization methods have allowed farmers to produce 70% more corn per ounce of fertilizer.

If there’s one message to relay to Bloomberg’s Jeff Wilson it’s this…Don’t underestimate the ability of the American farmer to produce!

During a press conference from Georgetown University on Wednesday morning, President Barack Obama laid out his administration’s “Energy Security” ...

South Dakota farmers intend to plant more acres of corn this spring than they have for 80 years. A prospective planting report released today by the ...