As news spread about devastating flooding in Nebraska that washed out a dam, destroyed homes and turned many fields into lakes, caring people in other states wasted no time responding.

On farms and ranches, many thousands of cattle were stranded and some died. Bales of hay were half-covered with water, grain bins were flooded and roads were closed. Livestock feed was an emergency need. Within hours, farmers began donating hay. In South Dakota, North Dakota and Minnesota. In Missouri, Kansas and Oklahoma. Even as far away as Ohio and Pennsylvania. And many other states.

As the number of hay donations grew, so did the number of people volunteering to haul the hay to the Cornhusker state. A convoy that originated in Dickinson, N.D., and picked up participants in South Dakota, hauled 200 tons of hay to Fullerton, Neb. The nine semi-trucks passed through Yankton, where hundreds of well-wishers lined the streets to show their gratitude.

That convoy and many other donations and transfers of hay were organized by Farm Rescue, a nonprofit relief organization that North Dakota native Bill Gross founded in 2005. By April 1, volunteers had delivered 25 loads of hay, with many more expected, said Dan Erdmann, Farm Rescue’s marketing and communications officer.

“Everyone took notice what was going on in Nebraska. The flooding was catastrophic in some areas,” Erdmann said. “We felt the best way to help was to initiate Operation Hay Lift, much like we did in 2017 when we hauled hay to ranchers dealing with drought in South Dakota. Since March 25, it’s been steady.”

Not all of the hay donations were group-organized. Trent Hanson of Presho was among the first individuals to respond when he donated and hauled 174 small square bales on March 17 to Columbus, Neb., where flooding was severe. The Columbus Sales Pavilion served as a drop-off point for people who donated hay.

“I had some bales in the barn, so I loaded them up and took off,” Hanson said. “Farmers kind of hang together. Someday, they might come back and help me. You never know.”

Hanson has a couple of friends in the Columbus area. Eric Rybak grew up near Presho, about eight miles away. “We’re like brothers on weekends,” Hanson said. “He wasn’t in the middle of the flooding, but he was on the edge of it. His other friend, Kylie Bloyd, organized a flood relief drive over Facebook and handled the details for Rybak’s donation.

The Nebraska Farm Bureau estimates that farm and ranch losses in that state could reach $1 billion.

Hay for livestock was one of the biggest needs, but because many livestock were stranded, surrounded by water, getting feed to them was a difficult challenge. During the last week of March, a Chinook helicopter dropped bales to stranded cattle in Colfax County.

Erdmann witnessed severe flooding damage near Verdigre, Neb. Three generations of a farm family there lost nearly everything after a dam on the Niobrara River broke near Spencer.

“There was no time for them to take care of anything. They lost their outbuildings, their fences, many cattle and calves,” Erdman said. “Thankfully, their herd was split up a little so they saved some. One house isn’t livable and the other house is gone.”

Although the flooding damage throughout the region has been widespread and devastating, the response that followed was impressive and overwhelming. It just shows that when times are tough, state borders don’t matter because people look out for one another. 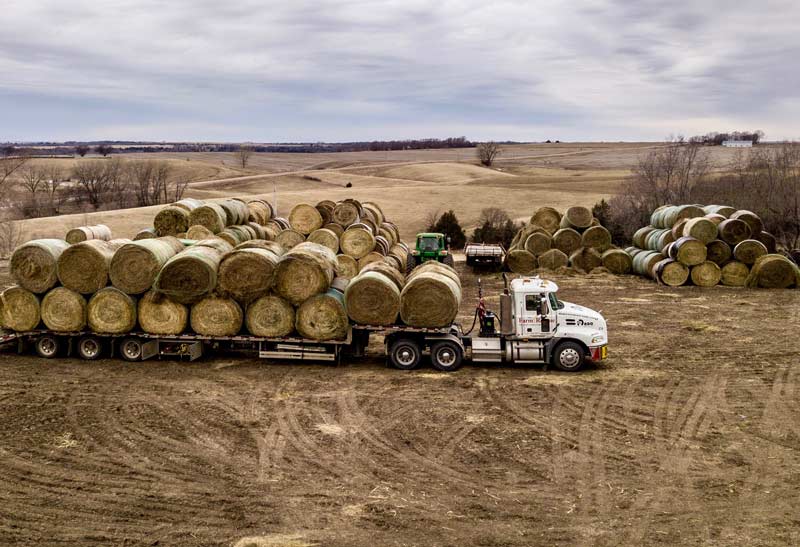 A Farm Rescue truck loaded with hay is parked at a donation drop-off area near Verdigre, Neb.

To help flooded farmers, go to farmrescue.org and click on “Donate.” Farm Rescue has about 1,000 volunteers in 49 states. The Nebraska Department of Agriculture also is organizing donations of hay; call 1-800-831-0550 to donate.

A new program is offering farmers in 15 South Dakota counties an opportunity to make the best use of unproductive land while also improving their bottom ...

Motorists will be able to fill their vehicles with E15 this summer if an EPA proposal gains final approval in time. A year-round offering of the 15 ...