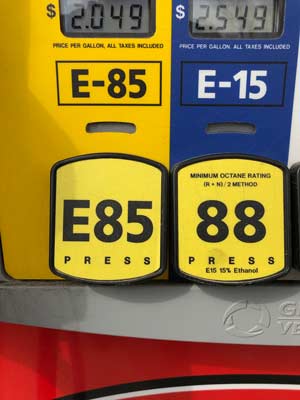 This summer, South Dakota drivers are able to do something they’ve never done this time of year–fill their vehicles with E15.

When the Trump administration announced on the last day of May that it was lifting the summer ban on sales of gasoline with 15 percent ethanol, it was welcome news for South Dakota corn farmers.

“This is a big deal for farmers, consumers, the ethanol industry and rural America,” said Doug Noem, president of the South Dakota Corn Growers Association. “We’ve been long-time advocates of higher blends of ethanol, and we pushed hard to get rid of the outdated regulation that required retailers to stop selling E15 during summer months.”

The SDCGA submitted comments to the EPA in April in support of ending the summer ban.

National ethanol organizations expressed their approval of the change.

“We are grateful to President Trump for delivering on his promise to unleash the power of E15 all year-long,” Skor said. “With year-round E15, retailers will have the regulatory certainty they need to offer American drivers a cleaner, more affordable fuel choice throughout the year. This action also means savings for American motorists at the pump and a sorely needed market for farmers who are facing a devastating economic downturn.”

The American Coalition for Ethanol (ACE), headquartered in Sioux Falls, said the announcement came in to provide retailers an opportunity to offer E15 during the peak driving season.

“We’re grateful the EPA kept the president’s promise to get the rulemaking done on time and we will work to ensure retailers understand their hands are no longer tied by red tape preventing them from offering a lower-priced, higher-octane E15 fuel to their customers,” ACE CEO Brian Jennings said. “For the ethanol industry and farmers, this means greater market access–more ethanol demand over the long term as additional retailers begin offering E15.”

Retailers are already stepping up. Casey’s General Stores announced they will expand their E15 offering to more than 60 new locations this summer.

“The summertime E15 restrictions have been a major concern for us for a long time, and would typically slow down our E15 expansion,” said Nathaniel Doddridge, Casey’s director of fuels. “Now that we know we can provide our guests with a consistent experience at the fuel pump year-round, we are expanding E15 at a faster pace to stay ahead of our competition.”

E15 is currently sold at 1,800 stations in 31 states. Through the U.S. Department of Agriculture’s Biofuels Infrastructure Partnership, $210 million was set aside for the installation of new ethanol infrastructure that began in 2016 and is expected to be completed this year. Through the South Dakota Governor’s Office of Economic Development, $1.5 million was earmarked to pay for 74 pumps at 34 stations.

Although South Dakota Corn and the ethanol organizations celebrated the year-round E15 decision, they expressed concerns about small-refinery exemptions to the Renewable Fuels Standard (RFS) issued to a large number of refineries. The EPA granted 53 exemptions to refineries for the 2016 and 2017 compliance years and has 39 waiver petitions currently pending. Corn farmers won’t be able to reap full benefits as long as the EPA gives oil companies exemptions from the mandate, allowing them to avoid blending biofuels with gasoline.

“The EPA’s ongoing mismanagement of the RFS through blanket small-refinery exemptions (SREs) needs to stop,” Jennings said. “The net effect of E15 year-round with 2.61 billion gallons worth of SREs that aren’t reallocated means we’re still in the hole when it comes to ethanol demand through the RFS.”

Vehicles approved for E15 use, according to the U.S. Department of Energy:

Figures included in a new report show just how important international markets are to our state’s economy. South Dakota exported a whopping $2.9 billion ...

EPA Approves Year-round E15, but Continues to Give Exemptions to Refineries

Like all things in farming these days, every bit of good news seems to be followed by a cause for concern. The recent announcement allowing E15 fuel to be ...