E15 for sale in Huron 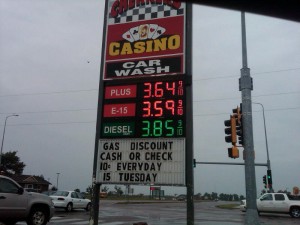 If you’re headed to the South Dakota State Fair this weekend in Huron don’t rub your eyes, that gas station marquee on Dakota Ave really does say E15. Chekker’s Fresh Start gas station is proudly fueling consumer’s cars and light trucks 2001 or newer up with the ethanol blend E15 (15% ethanol and 85% gasoline).

“We’ve been selling E15 for over a year now,” said the Huron Chekker’s manager, Vicki Peskey. “Folks took a while to warm up to it but it’s becoming a more popular blend. More and more people are going with it and saving money.”

Using E15 is not only saving those fuel consumers money, but it also keeps more of that money within the local community supporting local jobs, businesses and farmers.

“People are still learning about it,” added Peskey. “They’ve been talking with their mechanics and have reported no problems whatsoever.”

That comes as no surprise as E15 is the most tested fuel in history. After many months of testing, the Environmental Protection Agency ruled the blend safe for cars and light trucks 2001 and newer in early 2011.

The blend E15 may take a while to catch on nationally, but its progressive gas stations like Chekkers who are making it possible today by supporting a local and clean-burning product like ethanol.

Just how much impact would E15 have? Well according to a study by the University of North Dakota, the implementation of E15 would add 136,000 green jobs in the United States, reduce America’s oil consumption by 900,000 barrels per day and lower annual emissions equivalent to the removal of 4 million cars off the road.

New jobs, tax revenues and additional grain marketing options are just a few of the many positives brought about by the improvements being made to the ...

The South Dakota Corn Utilization Council (SDCUC) will commemorate the final year of a $1.2 million commitment to South Dakota State University with a ...