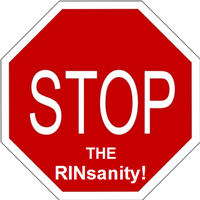 Ok, many of you are probably wondering what is RINsanity?

RINs, aka Renewable Identification Numbers, are serial numbers given to each gallon of renewable fuel in the United States to track just how much is being used.

Why track them? Because of the Renewable Fuel Standard which ensures that oil companies that own a large number of fuel retail locations are using a certain amount of American-made, clean-burning renewable fuel instead of high-priced imported oil from countries that don’t share American values. Partially breaking the monopoly held by Big Oil and ultimately creating jobs, reducing our dependence on foreign oil, reducing nasty emissions and keeping gas prices down. A successful policy that has no cost to taxpayers and has been a blessing for rural America.

Getting back to RINs. For years, oil companies have been making insane claims that RINs are driving up gas prices, and sadly some decision makers in the White House and the Environmental Protection Agency have believed them. You see, if oil companies fail to use renewable fuel, they then have to purchase RINs, which are free to companies that choose to comply with the RFS.

But a new study from Informa reveals that Big Oil’s claims about RINs are indeed false. Which seems to be the trend whenever the oil industry talks about American-made renewable fuels.

Independent analysis has shown that RIN prices had no effect on gasoline prices in 2013. Instead, the study found that gas prices are ultimately dependent on the price of crude oil and fluctuating seasonal demands.

This study is another piece of evidence that supports the country’s need to maintain the Renewable Fuel Standard, and squashes yet another lie from Big Oil.

Take a stand against Big Oil and show your support for the Renewable Fuel Standard and American biofuels by submitting comments to the EPA. Tell Washington: Don’t Mess with the RFS!

Another year is coming to an end, which means it’s time to review and reflect on what took place and what is to come. To help in this reflection we have ...