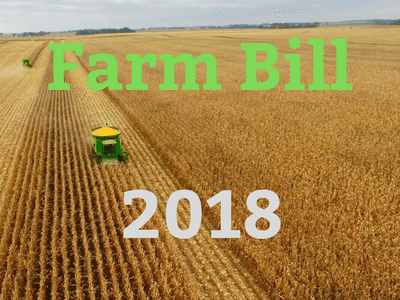 The 2018 Farm Bill that was signed into law last December continues the farm programs that were created in the 2014 Farm Bill, including the commodity crop programs Agriculture Risk Coverage (ARC) and the Price Loss Coverage (PLC).

One of the key changes is the election between ARC-County (ARC-CO) and PLC by crop and for each Farm Service Agency farm number. In the 2014 Farm Bill, it was a one-time election that could not be changed over the five-year period (2014 through 2018). In the 2018 Farm Bill, however, the initial election is for the 2019 to 2020 crop years. Beginning with the 2021 crop year, a farmer can change the ARC/PLC election annually through 2023. In all elections, the PLC program remains the default option.

A second major change to farm programs is an option to update program yields for the PLC program. A farmer will have a one-time option to do this update, but the formula is somewhat complicated. It operates in two steps: (1) 90% of the average yield for the 2013 through 2017 crop years, excluding any crop year in which the yield was zero; and (2) reduced by a ratio that compares the 2013 through 2017 national average yields per planted acre to the 2008 to 2012 national average yields.

Other changes in the ARC/PLC program

In addition, the new Farm Bill also includes changes to the calculation of yields for the ARC-CO program. Specifically, the plug yield is 80% of the transitional yield and is used in the ARC calculations to replace yields in any year that are below that level.

The rules and regulations for the 2018 Farm Bill will still need to be written and approved. Following this, the USDA Farm Service Agency staff will need to be trained and software written to assist with the ARC/PLC election and enrollment. It is expected that the 2-year election and 2019 program enrollment will begin in early September.

The 2018 Farm Bill also includes modified language regarding base acres. Specifically, it prevents payments on any base acres if all the cropland on the FSA farm was planted to grass or pasture during the years 2009 through 2017. The base acres and program yields for the farms affected by this provision will remain on record with FSA, but payments will not be made on those acres and farms.

Finally, the 2018 Farm Bill increases the loan rates for the Marketing Assistance Loan (MAL) and the Loan Deficiency Payment (LDP) programs. Since the 2002 Farm Bill, the national loan rates have been $1.95 per bushel for corn and $5.00 per bushel for soybeans, respectively. These loan rates will be adjusted higher for crops in each county.

Johnson is an Iowa State University Extension and Outreach farm management specialist. He can be reached at sdjohns@iastate.edu.

Motorists will be able to fill their vehicles with E15 this summer if an EPA proposal gains final approval in time. A year-round offering of the 15 ...