Farmers do their best to raise crops, preserve habitat and help pheasant numbers 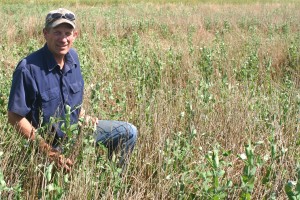 Farmers don’t get much credit for growing more and more crops to meet the rising demand for food, feed, fuel and fiber in a world where nearly 16,000 babies are born every hour.

And they don’t hear much praise for decreasing their use of chemicals or for taking steps to protect the soil and reduce erosion.

These days, it seems like people just want to blame farmers for a number of things, such as high grocery prices and polluted rivers.

The latest criticism is that they’re converting too much grassland into fields of corn and soybeans. That charge was leveled in late August by grassland advocates who gathered in Sioux Falls for a conference.

And when the South Dakota Game, Fish and Parks Department’s annual pheasant count estimated a 46 percent drop in population this year, one of several reasons cited was a reduction in Conservation Reserve Program acres.

To the GF&P’s credit, it did place much of the blame for fewer pheasants on a “brutal winter.”

Lisa Richardson, executive director of the South Dakota Corn Growers Association (SDCGA), said the state’s farmers are doing an exceptional job of taking care of the environment while producing enough crops to meet continually growing needs. Crops and wildlife are both at nature’s mercy.

“Just like the corn crop is affected by the weather, so is the pheasant population,” Richardson said. “We can co-exist. We need nesting habitat, but we also need food.”

South Dakota was bound to have a dip in pheasant numbers one of these years. The pheasant population has been above 8 million for eight consecutive years, numbers that hadn’t been seen since the early 1960s.

No matter how many acres are enrolled in conservation programs or how well conservation practices are followed, weather often is the biggest factor in the pheasant population.

That was the case in the White Lake area this year, said David Gillen, a local farmer and member of the South Dakota Corn Utilization Council (SDCUC) board of directors. In this instance, the biggest culprit was a 5-inch rain about the time that pheasants were hatching, he said.

Gillen said a change in CRP acres certainly isn’t to blame in his region, which is one of the state’s prime hunting areas. Most landowners hunt and also open their land to hunters, so they set aside acres that are good for hunting near creeks and sloughs. Most of that land isn’t enrolled in CRP. Land owners also have planted many acres with trees, he said. One downside to the abundance of trees is an overpopulation of deer.

Gillen has very little land in CRP, but has a lot of grassland. He doesn’t receive any federal payments on that land – revenue from pheasant hunting covers the land costs in those areas.

“When they did come out with CRP, it did enhance hunting,” Gillen said. “The hunting businesses in this area have grown so much that there’s less of a need here for CRP.”

Gillen said pheasants like a variety of habitat: corn and soybeans, grass areas, and wetlands with cattails. They like to be in 3 or 4 acres of grass, not full quarters. Pheasant chicks that hatch on a full quarter of grassland are less likely to survive because there’s so much growth that they can’t maneuver. Hens like to take the chicks to the edge of taller habitat so they can get sunshine.

To create additional pheasant habitat and add nutrients to his soil, Gillen planted a crop-cover mixture of peas, lentils and radishes on his wheat ground immediately after the harvest.

The past two winters have been rough, Gillen said. Yet, he believes winter survival rates were fine, particularly on land with shelterbelts. But pheasants don’t do well at finding nests. The nests are sometimes too low, and susceptible to water. A one-inch rain isn’t a problem, but five inches is.

“Weather has a huge, huge impact on the hatch,” he said. “One hen will have 14 chicks if it’s in the right environment.”

Gillen said he’s been seeing various sizes of chicks recently. Some are older and some are only three inches high. Those won’t change color before hunting season.

This article is from the September 2011 issue of South Dakota Corn Talk.

September 18-24 marks National Farm Safety Week. While encouraging safety on the farm is not a new trend, it is a very important one. Farming continues ...