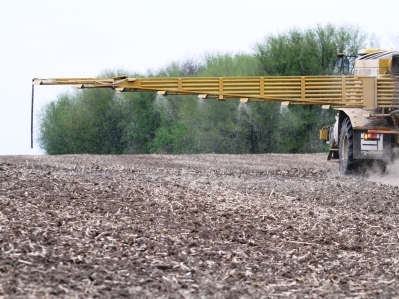 Growing more, using less seems to be a consistent theme in conventional agriculture today as farmers adapt their operations to use the latest technology and conservation methods. That phrase continues to hold true as last week The Fertilizer Institute announced that during the last 30 years corn yields have doubled while famers have reduced their nutrient inputs.

“Through improvements in modern technology and old fashioned ingenuity, our farmers are using fertilizer with the greatest efficiency in history and have again shown why U.S. agriculture will continue to feed the world,” said TFI President Ford West. “Fertilizer nutrients are essential components in food, feed, fiber and fuel production and we anticipate that maximizing production from future new seed varieties will require a diet that can only be met through the efficient use of commercially produced fertilizers.”

Experts estimate that between 40-60% of the world’s food production can be attributed to fertilizers showing just how vital those nutrients are to the worlds growing need for food. According to the USDA, one additional bushel of corn can in turn produce six pounds of beef, 13 pounds of pork, 20 pounds of chicken or 28 pounds of fish to feed families around the world.

“This release shows that farmers’ efforts and investment in nutrient application efficiency are not only helping to feed and fuel the world, but also protecting the environment through cleaner water,” said South Dakota Corn Growers Association President, Gary Duffy. “While most people hear about fertilizers from the radical fear-mongering specialists, its evidence like this that shows who the True Environmentalists really are.”

On a hot South Dakota summer day, nothing tastes much better than a cold ice cream treat. As summer draws near South Dakota Corn encourages everyone to ...

Water, water and water seem to be a troubled theme across the state of South Dakota and beyond. That water has severely delayed or canceled planting in a ...