Farming is a Family Thing 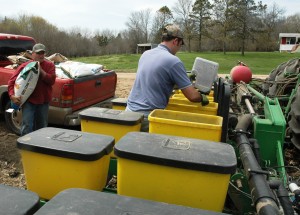 Keith and his father Ron filling their corn planter.

With a growing majority of people being two or more generations removed from the farm, thoughts about who grows the food you and I eat are often overlooked. Over and over, certain media portray our nation’s food producers in an unfair and negative light with words like “Factory Farms” or “Big Ag” while those terms actually represent a very small portion of American agriculture.

In fact, according to a new study from the USDA’s Economic Research Service, family farms represent nearly 98% of the total farms in the United States. Those same families produce around 88% of the food in our country, an overwhelming majority. Grandpas, fathers, mothers, uncles, aunts, sons and daughters work together to raise the fruits, vegetables, grains, meats and dairy products that most of us take for granted.

That national trend is the same here in South Dakota where 98% of the farms are family owned and operated, according to the South Dakota Department of Agriculture.

I myself am a sixth-generation family farmer. I am proud to grow corn and soybeans along side my uncle and father, along with our families near Chester, SD. And if I am lucky, my son or daughter will someday work with us, continuing the tradition of families producing the food, feed, fuel and fiber that America and the rest of the world depend on.

The House takes on the Farm Bill

After swiftly passing through the United States Senate, the 2012 Farm Bill now lies in the hands of the House of Representatives. Progress is underway ...

The South Dakota Corn Growers Association applauds the bipartisan efforts of the United States Senate on the passage of the Agriculture Reform, Food and ...