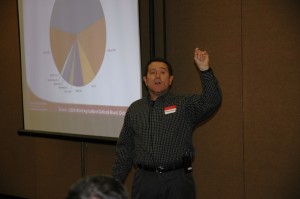 After stops in Sioux Falls, Yankton, Watertown, Huron and Mitchell during the past week, GrowingOn 2011 Part 1, with Iowa State University Extension Specialist, Steven D. Johnson has come to an end. Nearly a thousand farmers attended the events bringing plenty of questions about their crop marketing decisions.

Johnson’s presentation “Controlling the Crop Controllables,” takes on a simple, yet important approach.

“Control what you can control… because only God can predict the future,” said Johnson.

Johnson advised the crowds to quit worrying so much about the price per bushel and concentrate more on your total production costs. Producers need to be making crop decisions year round when it comes to pre-payments for fertilizer, fuel, seed, storage and crop insurance.

American corn farmers are the most productive in the entire world, producing 42% of the world’s production and that corn is in high demand. Volatile weather patterns across the globe, increased ethanol production and low carry out should keeps prices up into the next crop year. 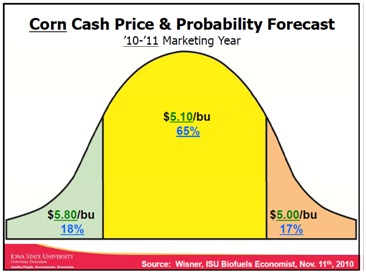 “This is a great time to be in row crop agriculture, just imagine what grandpa would think he if were alive to see consistent five dollar corn.”

If you were unable to attend GrowingOn 2011 part 1, you can watch a similar presentation by Johnson online at the following link.

The United States House of Representatives passed the Tax Bill Thursday night sending it to the desk of President, Barack Obama who has signed the bill ...

On Monday the U.S. Senate proceeded on tax bill, H.R. 4853 by way of a cloture vote. The bill includes a one year extensions of the Volumetric Ethanol ...