Harvest Was A Bear, But Yields Were Stellar 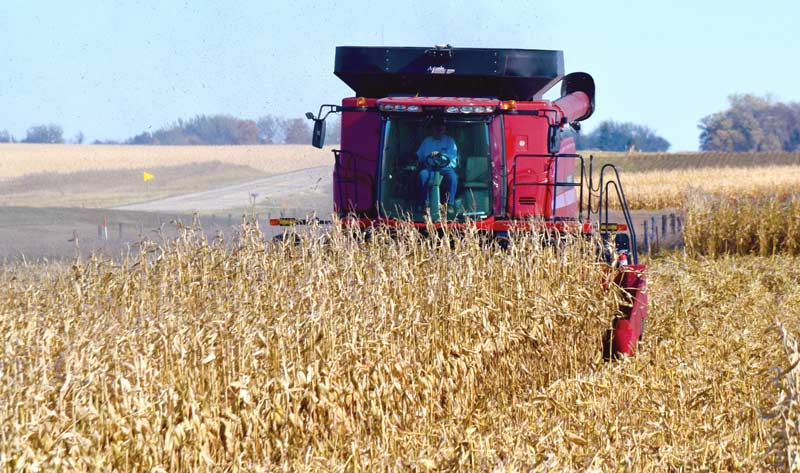 A number of South Dakota farmers spent their Thanksgiving weekend harvesting corn. It’s been that kind of year.

Getting the crop out of the field was a big challenge throughout much of the state, but the reward for many came in the form of high yields. South Dakota’s corn crop is forecast to be 822 million bushels once the results are finalized. That would be the second largest corn crop in history, according to the USDA’s National Agricultural Statistics Service.

The statewide average corn yield is forecast to be a record 166 bushels an acre.

“It was a battle. We had to fight to get every bushel out of the field,” said Scott Stahl, who farms near Emery. “But I feel blessed because we had a record corn crop and a top-5 soybean crop.”

Stahl farms with his dad, Charles, and uncle, Robert. Those two said this has been the most-challenging harvest, by far, in their 35 years of farming in western McCook County. The Stahls started harvesting Sept. 10 and finished Nov. 12–about 20 days longer than in a year when things go smoothly.

“It was just one of those years where there was excess moisture all year long, and it didn’t stop in the fall. It presented a lot of challenges and was hard on equipment. We always had a cable and chain available to pull things out,” Scott Stahl said. “Sometimes you go through that struggle and you get half a crop. This time it was a struggle but we had a good crop. I’m thankful to have an abundant year.”

Stahl is also thankful he had a good crew to help with the harvest in difficult conditions. “That’s priceless in a year like this,” he said.

Robert Walsh of Elk Point had to deal with fields that looked like lakes at times during the season. Severe flooding in late June forced him to replant soybeans–even into July–and plant cover crops so there was ground cover. In late September, 80 percent of those fields were flooded a second time. Soybeans that he replanted July 13-15 yielded only 15 to 20 bushels per acre.

He said one-third of his farmland received more than 36 inches of rain from April 20 through November. The least amount any of those fields received during that time period was 25 inches. That’s in addition to moisture from snow in March and April.

On Thanksgiving weekend, Walsh still had a little bit of corn standing. In his region, some farmers were able to start harvesting well-drained fields in September and were done well before Thanksgiving. However, land near the Big Sioux River wasn’t conducive to field work. Many of his fields are no-till so he had to avoid tearing up the wet fields with heavy farm equipment that would leave ruts.

“In the frozen mornings, I tried to get more and more out,” he said.

Walsh’s corn yields were very variable, ranging from a 50-bushels-per-acre average in a field with heavy gumbo soil to 235 BPA in a field a mile away. Clay County fields that are drain tiled had phenomenal yields, he said. Oats that he planted as a cover crop survived under water while a neighbor’s rye died.

Ryan Wagner of Roslyn was still harvesting the last week of November, at a standstill for several days because of snow on the corn. He said at that time that a number of farmers in his region needed another week or even 10 days of favorable conditions to finish harvesting. Some parts of South Dakota received record snowfalls in April.

The snow was in addition to 17 to 26 inches of rain the Roslyn area received between May 1 and Thanksgiving. Because of the wet soil, it was important to be smart about where to park the truck. Although harvest has been a big challenge, Wagner said they’ve dealt with similar situations in the past.

Planting got off to a slow start this year, too, thanks to a cold, wet April and frost in the ground until early May. To make matters worse, a hailstorm swept through that region July 9, Wagner said.

“The top-end yield, where we weren’t hailed, was the best we ever had,” he said. “It would have been a record for our farm if not for the hail.

Grant Rix of Groton experienced a wide mix of weather conditions during the season, with some of their fields 50 miles apart.

“Our yields went from very poor to very excellent. They ran the whole gamut,” Rix said. “We ran from drought to wet to drought again.”

He said the worst drought was west and southwest of Aberdeen. Bad crops were separated from good crops by only 10 miles. Rix’s corn yields ranged from 135 to 235 BPA and soybeans from 30 to 60 BPA.

Harvest went pretty smoothly for Rix, allowing him and nearly 50 other farmers in the area to help combine crops for another farmer who had to deal with a son’s serious medical conditions. In one day, those farmers were able to harvest 750 acres of corn on a farm five miles south of Houghton.

Farmers are hopeful they’ll have high yields again next year, but with fewer weather-related headaches.

Construction of the Ringneck Energy ethanol plant at Onida will be completed on schedule, but the company may postpone startup until late February. The ...

Celebrating the Accomplishments of 2018

December is a time for celebration and reflection. 2018 has been a monumental year for South Dakota Corn. We’ve made an impact on ag policy, helped pave ...