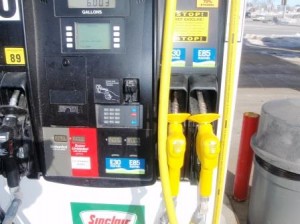 Governor Dennis Daugaard signed South Dakota House Bill 1216 “An Act to prohibit certain contract restrictions on the use of ethanol blender pumps by retailers,” into law on Tuesday afternoon giving all fuel station owners the right to install ethanol blender pumps without having to receive franchise approval.

The bipartisan bill from Representative Mitch Fargen and Senator Russell Olson was brought forward after gas station owners were unable to install blender pumps because of franchise agreements after attempting to use grant money from state legislation passed in 2010.

“This bill will give all gas and co-op stations across the state the option of installing ethanol blender pumps regardless of their franchise agreements,” said the bill’s prime sponsor Mitch Fargen. “We can start expanding this program within our state and set an example for other states with the help from groups like South Dakota Corn and South Dakota Farmers Union.”

On the Senate floor, Senator Russ Olson said, “I look at 1216 as a pro-South Dakota bill. In a way I’m asking you, through getting rid of this mandate and this prohibition from these big oil companies telling our South Dakota merchants that they can’t sell ethanol, to put South Dakota first.”

The governor’s office has been in support of HB1216 since its first introduction as it seems to go hand in hand with the governors bill SB 192 which spreads out the states ethanol incentives plan with the intention of creating more ethanol blender pump infrastructure in South Dakota.

“We continue to be impressed with Representative Fargen’s and Senator Olson’s leadership in Pierre,” said Teddi Mueller, Legislative Affairs Director at South Dakota Corn. “Their outstanding efforts for the ethanol and agriculture industries are sure to have a lasting and positive impact on our state’s economy.”

With all of the recent press and proposed legislation about the need to eliminate VEETC, the ethanol blender’s credit, people should first compare the ...

As controversy continues to swirl in the Middle East, oil prices continue to soar. High oil prices affect nearly all American motorists in a negative way ...