Healthy Soil on Display at Workshop

Ryan and Terry Wagner are reaping the rewards of three decades of no-till farming.

The soil on their farm near Roslyn contains 5.1 percent organic matter, with a range from the low 4’s to upper 5’s in every field. The fields have a deep layer of topsoil and water infiltration is exceptional. 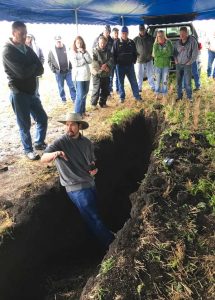 Nearly 50 people got an up-close look at the Wagners’ soil and learned about their farming practices during a September soil-heath workshop organized by South Dakota Corn, the South Dakota Soil Health Coalition, South Dakota State University and the Natural Resources Conservation Service. Participants learned what the Wagners have done in the past and are doing now to protect and improve the health of their soil.

“A lot of the farming practices we use were started by my dad (Terry),” Ryan Wagner told the group.

Terry Wagner said he learned about no-till during a conference at Pierre and became sold on that method of farming. He bought John Deere 750 no-till drills in 1990 and converted every acre to no-till.

“We jumped in with both feet,” he said.

The main reason for the switch, Terry said, was to reduce wind and water erosion. The ability to improve soil health was another factor.

He says before switching to no-till, the soil probably contained 2-3 percent organic matter, well below current levels. Terry estimated that their no-till practices increased organic matter about 0.1 percentage point per year. The organic matter was visible in a soil pit that was dug for the workshop.

For the past few years, the Wagners have been using a 40-40-20 percent crop rotation of corn, soybeans and spring wheat. Each field goes to spring wheat every fifth year. In 2010, they started planting cover crops, using an air seeder. Their current mixture contains forage peas, lentils, foxtail millet forage oats, cowpeas, balansa clover, common vetch, forage radishes, forage turnips and sunflowers. Although they don’t have cattle, a neighbor’s cattle does some grazing in their fields.

The Wagners test their soil every year. They knife nitrogen into the fields each fall and spread potassium and phosphorus on top. Applying nitrogen in the fall can be a challenge because cover crop growth can get pretty heavy.

Asked if the demonstration field has been drain tiled, Ryan said they did some tiling in a couple of spots to get rid of excess water in the spring.

“I think tiling is a good fit with no-till,” said Ryan, who is president of the South Dakota Corn Utilization Council. “It definitely helps water infiltration.”

Jim Ristau, South Dakota’ Corn’s sustainability director, conducted a water infiltration test in the field. Even though the farm received one-half inch of rain prior to the workshop, when Ristau poured one-inch of water into an infiltration ring, it sunk into the soil within 15 seconds. When he applied an additional inch of water, it sunk in about two minutes.

“So, two inches of rain were going into the ground in 2½ minutes,” Ristau said. “That’s an incredibly fast rate of infiltration.”

If soils aren’t prepared to receive large amounts of rain, there will be runoff. Carrie Workmeister, an NRCS wetland specialist, said that runoff is likely to take away expensive fertilizer. It also reduces yields.

“Good chocolate cake sucks up milk, just like a sponge,” Jones said. “With bad chocolate cake that’s been in the fridge for a week, milk just runs off the top. It doesn’t function like healthy chocolate cake or healthy soil. This soil sucks moisture right up and holds onto it. This has great water-holding capacity. That provides a lot of moisture your plants can live off of until the next rain. If you’re not catching every inch of rain, you’re losing production.”

“I tell farmers if you just want to farm 20 or 30 years, till away,” he said. But over a 100-year period, there will be extensive loss of organic matter. “Areas of Europe destroyed their soil. You can get to the point of no recovery.”

A new turkey hatchery at the northeast edge of Beresford will provide a closer source of poults for turkey farms in South Dakota and throughout the ...

E-15 Gets Presidential Approval: A Huge Win for Farmers

South Dakota corn farmers recently celebrated a big win with President Trump’s announcement on October 9 that he has approved making E-15 available all ...