When it comes to improving and maintaining the health of soil, there’s no universal recipe that works for everyone. Whether the method is planting cover crops, reducing tillage, incorporating crop rotation or a combination of practices, a growing number of farmers are making a commitment to improve the soil that nourishes their crops.

“There’s no cookie-cutter answer to every situation. There are really a lot of good things happening,” says Jim Ristau, South Dakota Corn’s director of sustainability. “Making a commitment to soil health is now more the norm than the exception. You aren’t the outlaw out there anymore. It’s a good thing to build the health of your soil for the long term. It also makes economic sense; it helps your bottom line. When you can line all of that up, it’s a no-brainer.” 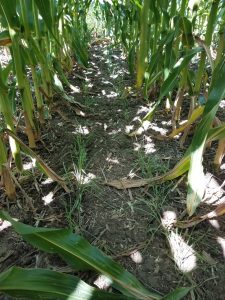 Ristau says farmers need to understand their farm’s soils, the water cycle and the environment they’re in. Transitioning to various soil health practices can be a big step. For some, maybe the best place to start is in a farmer’s worst field. Perhaps start with some cover crops.

“Set a goal of what you’re trying to accomplish,” he says. “If a field isn’t draining, there are things you can do to improve infiltration. You can’t just say it rained too much.”

Modern technology is a valuable tool in determining problems, finding solutions and helping with decision making. And there are resources available, including the South Dakota Soil Health Coalition, https://www.sdsoilhealthcoalition.org/. It’s a matter of understanding the principles and your farm, and then determining what you want to achieve.

Soil problems, health and productivity were among the topics discussed July 26 at the annual Ag PhD Field Day hosted by Brian and Darren Hefty. Discussing infiltration, soil compaction and nutrients, Brian Hefty drew up an unusual analogy for the attentive audience that had gathered under a large tent to hear his presentation.

While nitrogen, phosphorus and potassium have been the main focus of fertilization practices, calcium, zinc and magnesium are sometimes overlooked but important, Hefty said.

Jason Schley, an agronomist with NLAg Next Level Ag Laboratories at Alpena, agrees. He does soil and tissue testing in a large region of South Dakota and uses those test results to help farmers develop strategies. He believes many more farmers are taking steps to improve the health of their soil: better rotation practices, cover crops, split application of fertilizer and no-till farming.

“Soil health is gaining attention and attraction,” he says.

As farmers deal with a sluggish ag economy, Schley says it’s important to be efficient. Soil and tissue testing throughout the season, and variable rate mapping, are valuable tools in that regard.

“If I don’t feel I can get 150-bushel corn, I’m taking some out of production,” he says. “Twenty years ago, I was going to put corn and beans on every acre. Now, I’ve learned that might not work on the ground I have.”

Fritzche is also doing some side-dressing and inter-seeding. In soils with high saline content, he’s trying to improve infiltration.

“I don’t have a handle on everything. It’s a learning process,” he says. “It’s hard to balance between agronomics and economics right now. It’s hard to take your worms to your banker. There’s no line item for your worm count. You still have to be profitable on the bottom line.”

Conrad Waldner of Pearl Creek Farms says they discovered they were overfertilizing, so they reduced the amount of nutrients they apply and have saved a lot of money. They use zone management.

Change isn’t easy, but Ristau has three words of advice for farmers as they try different methods of improving soil health: “Don’t give up.”

Yes, You Can Make Money in Farming

Trying to make money in a down ag economy is sometimes like trying to make it rain—and can be a losing battle. Many South Dakota corn farmers know this ...