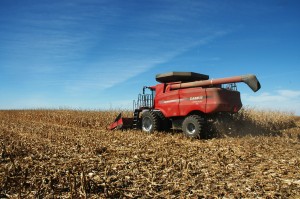 The ethanol negatives have lies, scare tactics and flawed science, but the ethanol industry has something more powerful, sound science. Indirect land use change has long been popular falsity spread by the anti-ethanol crowd and media, but a recent study sheds truth onto this “theory”.

Scientists of the Oakdale Institute will soon release a paper showing that biofuel production has had little to no effect on indirect land use change. The idea behind Indirect Land Use Change was that grain being used for biofuel production would cause additional carbon emissions by farmers overseas. The study was done using real world data on land use during the years between 2001-2008 when corn ethanol had increased more than four fold.

“If ever this idea of indirect land use was going to be proven, one would think it would be during that time,” said Renewable Fuels Association’s, Matt Hartwig.

Along with that, researchers at Michigan State University released a paper, Biofuels Done Right: Land Efficient Animal Feeds Enable Large Environmental and Energy Benefits, showing significantly larger volumes of biofuels can be produced without pulling marginal land into production. The paper noted that “Using less than 30% of total U.S. cropland, pasture, and range, 106 billion gallons of ethanol can be produced annually without decreasing domestic food production or agricultural exports. This approach also reduces U.S. greenhouse gas emissions by 670 Tg CO2-equivalent per year, or over 10% of total U.S. annual emissions, while increasing soil fertility and promoting biodiversity. Thus we can replace a large fraction of U.S. petroleum consumption without indirect land use change.”

In the not so distant past, this unproven “theory” was shaping national policies as indirect land use change has continually penalized corn ethanol production through the California Air Resource Board’s emissions standards and the Environmental Protection Agency’s decisions on classifying biofuels.

Last February, the EPA announced that corn ethanol would be classified as a renewable fuel because it reduces greenhouse gases by more than 20%. But without putting ILUC into the equation, corn-based ethanol actually reduces GHG’s by 52% which would classify it as an advanced biofuel. This means corn ethanol could play a bigger factor in achieving the future goals of the United States Renewable Fuels Standard.

That good news as America’s corn farmers are continuing to grow record crops on less land, ensuring that there will always be an ample supply to meet current and future food, feed, fuel and fiber demands while improving our environment and reducing our dependence on foreign oil.

So while sound science has finally put the ILUC theory to bed, but you have to wonder what kind of scheme the anti-ethanol crowd will come up with next?

The United States Department of Agriculture’s Secretary, Tom Vilsack, has been very vocal lately stressing the importance of domestic biofuels and its ...

NASCAR filling up with E15

NASCAR, the most popular racing sport in the United States, burns a lot of fuel and starting in 2011 15% of that fuel will be ethanol. The move to the E15 ...