With a focus on helping to feed the state, the two scho 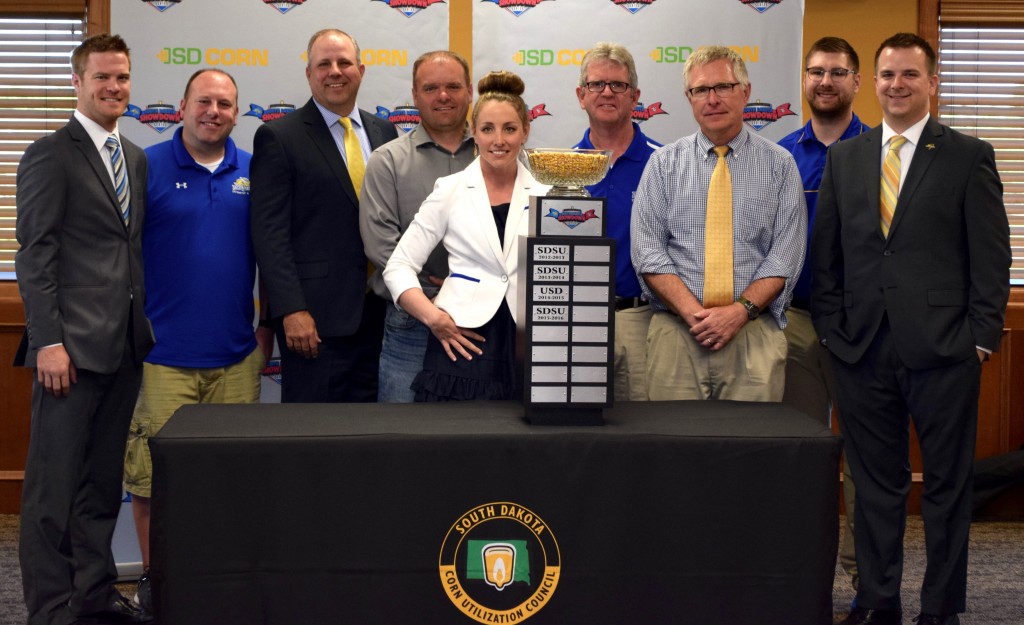 ols’ student bodies stepped up in a big way in 2015-16 to raise funds to feed hungry families. At the football and basketball head-to-head match-ups, two students aimed to set a new world record of T-shirts put on in one minute. While they didn’t break the record, the students generated almost $12,000 for Feeding South Dakota.

“The Showdown Series is a perfect opportunity for our state’s farmers to share the story of our commitment to feed a growing world while also preserving our precious natural resources,” Corn Utilization Council President Reno Brueggeman said. “And the success of this series has provided the resources for Feeding South Dakota to provide hundreds of thousands of meals the past several years to make sure South Dakotans don’t go hungry.”

The Showdown Series raised $66,000 for Feeding South Dakota during the 2015-16 athletic season.

“All season long both SDSU and USD have been able to showcase academic and athletic excellence with the help of the South Dakota Corn Utilization Council,” SDSU Director of Athletics Justin Sell said. “As Division I institutions, we are proud to place a high value on sportsmanship and community service to meaningful organizations, such as Feeding South Dakota.”

This season the series showcased a high level of competition. Three women’s basketball games were decided by six points or less. The Coyotes won the regular season conference title and the Jackrabbits won The Summit League Tournament for the third time. Both USD and SDSU women went on to play extended season games with the Jackrabbits advancing to the second round of the NCAA Tournament and the Coyotes winning the WNIT.

The series is structured against a point system in which each school can earn 24 points per year based on head-to-head competition and conference championships between SDSU and USD, in 17 men’s and women’s sports. Points are also awarded for athletes’ GPAs and philanthropic efforts.

About 200 golfers competed Thursday in the 25th annual Corn Cob Open, a fund-raiser put on by the South Dakota Corn Growers Association. A number of teams ...

Touch up your golf game for the Corn Cob Open

Registration is now open for the 25th annual Corn Cob Open, which will be held Thursday, June 16 at Spring Creek Country Club near Harrisburg. The ...