Restaurants Against the RFS 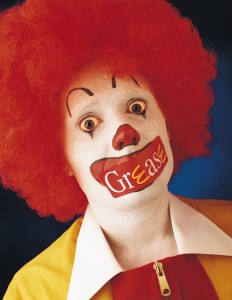 In today’s world of fast-food, corporate greed knows no boundary as America’s renewable fuels industry is not only under attack from Big Oil, but Big Grease now as well.

The attacks on farmers have been seen from the National Council of Chain Restaurants including Wendy’s, Arby’s, Domino’s, McDonald’s and many more in what seems to be an annual assault on America’s most successful renewable fuel policy. As these fast-food restaurants continue to smear the Renewable Fuel Standard (RFS) in an attempt to grow their already enormous corporate profits, they in turn hurt America’s family farmers who work to meet tomorrow’s market demands for food, feed fuel and fiber in an increasingly sustainable manner.

These restaurants argue that the RFS is hurting their business by driving up their prices. This of course if absolutely absurd with the price of corn currently at 1970s era levels, well below the cost of production for some farms. How cheap would these fast-food empires like to see the price of corn?

In addition, real-world data shows us that corn is simply a minuscule part of determining what food costs today with less than 16 cents of each dollar spent on food coming back to the farm. Data from the World Bank shows us that the price of crude oil is the driver for more than 50% of the increases in food prices since 2004.

It should also be noted that the benefits of the RFS go well beyond the farm. The renewable fuels industry supports nearly 400,000 jobs, saves consumers money at the pump, decreases America’s dependence on foreign oil (by 515 million barrels in 2014 alone), drastically reduces greenhouse gas emissions, contributes more than $52 billion to the GDP and over $10 billion in taxes.

We would encourage all ethanol supporters to consider choosing a different place to eat the next time you are dining out.

For more on this subject, read: Super-sized Hogwash: Examining the Chain Restaurants’ Rhetoric about the RFS and Food Prices

The Sioux Falls Skyforce will be sporting maize-colored, corn-themed uniforms tonight against the Grand Rapids Drive as a part of Ag Appreciation night at ...

The Sioux Falls Skyforce and South Dakota Corn are teaming up this week to raise money for Feeding South Dakota through a promotion that includes special ...