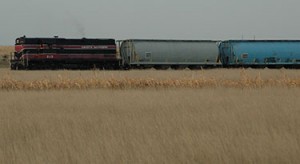 New jobs, tax revenues and additional grain marketing options are just a few of the many positives brought about by the improvements being made to the state-owned rail line between Mitchell and Chamberlain, South Dakota. The much needed renovations stemmed from a $16 million grant from the federal governments’, Transportation Investment Generating Economic Recovery program last October.

Upgrading the rail line will improve both time and energy efficiency and help meet the rising demands brought about by increased corn production from area farmers.

“The Corn Belt continues to move west and this project will not only add value to the crops being raised, but to the surrounding communities as well,” said South Dakota Corn Utilization Council president, Chad Blindauer, a farmer from the Mitchell area.

The rail enhancements have created the opportunity for at least one if not two new grain handling facilities between Kimball and White Lake. A new grain facility is going up 6 miles east of Kimball with the expected completion date of October 2012. The new facility could handle between 400-600 trucks per day dumping 100,000 bushels per hour with the potential of handling 15 million bushels of grain each year. The new facility will also employ around 100 jobs during construction and 12-15 fulltime positions during operation.

The Aberdeen American News reports that another new and similar sized elevator located on the Kimball airport location is also in the works.

The rail line is projected to serve between 6,000-8,000 rail cars per year shipping grain to the Pacific Northwest. The total project cost is estimated to be around $28 million with the remainder of the funding coming from Dakota Southern Railway Company.

Finally, a film that dares to defend America’s only available alternative to gasoline, ethanol. The job producing and environmentally friendly fuel has ...

E15 for sale in Huron

If you’re headed to the South Dakota State Fair this weekend in Huron don’t rub your eyes, that gas station marquee on Dakota Ave really does say E15. ...