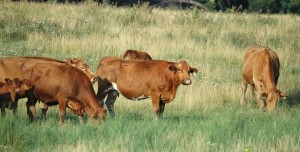 Is increased ethanol production hurting beef cattle and dairy operations? The answer is NO according to a recent Texas A&M study detailing that cattle operation profits have increased since the implementation of the renewable fuels standard, which mandates that certain amounts of renewable fuels be used in the United States each year.

The study originated from allegations that increased corn ethanol production was causing instability and uncertainty in beef and dairy operations. While the analysis did show an increase in feed prices, the overall profits outweighed the increased costs.

“For years, corn farmers have understood that we have the ability to supply both growing ethanol and livestock producers simultaneously without negatively impacting these valued customers,” said South Dakota Corn Growers Association President, Gary Duffy, a farmer and rancher from Oldham. “With advances in both seed and farming technology, we have increased our average yield substantially in the past few decades. This abundance allows us to meet increased demand, providing both feed and fuel that benefit our nation’s economic security.”

Not only does this study answer the questions of those in the livestock industry, but it reassures our countries’ policy makers that the Renewable Fuels Standard is truly an effective program that is not hurting other facets of agriculture. The study also extinguishes yet another anti-ethanol myth.

“While it is easy to reiterate artificial arguments against the use of ethanol, we believe this study clearly illustrates the fallacies on which they are often based,” said Duffy. “This study again concludes that, in reality, we do not have to choose between using corn for food or fuel.”

Not so costly corn

It’s amazing how misinformation can spread these days with nothing other than uneducated opinions and easy-to-blame targets. This seems to be especially ...

With more and more families continued to be removed from the farm, most kids today have no idea how their food is raised or where it comes from. To remove ...