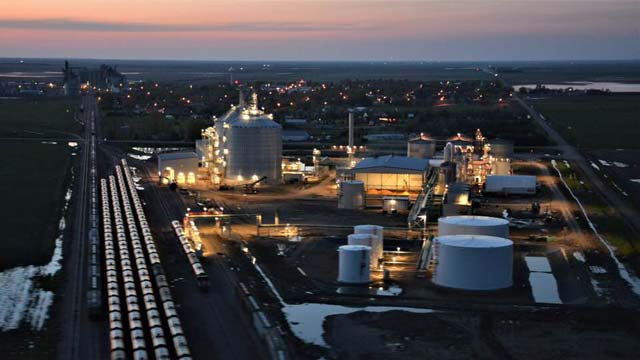 South Dakota’s new ethanol plant is up and running.

The Ringneck Energy plant at Onida completed performance tests several weeks ago, then started full production. An open house and plant tours will be scheduled in the near-future.

Plant Manager Mike Stanley says Onida residents and farmers in the area have been looking forward to the project’s completion.

“Everyone’s pretty excited and supports the plant,” said Stanley, who bought a house in town. “I want people in town to be happy with the plant; I live in the community.”

Stanley said he was excited to get the first string of railcars filled with ethanol and moving down the tracks.

“That means there’s some income coming in,” he said. In addition to construction costs, the plant purchased a lot of corn in advance, so he and investors were eager to begin producing and selling ethanol.

To complete the performance test, the plant ran full-bore, at a rate that would produce 80 million gallons of ethanol in a full year.

Stanley has 20 years of ethanol plant experience, all with Agri Energy in Luverne, Minn., where his roles included maintenance manager, operations manager and then plant manager. Having grown up not far from Onida, he said the Ringneck Energy plant provided him an opportunity to be closer to home while coming on board with a brand-new facility.

Ringneck President and CEO Walt Wendland said he’s pleased with the quality and expertise of the staff, from the management level all the way down.

Wendland had hoped the plant could begin full production sooner but there were some delays because of adverse weather and a few typical startup issues, as well as negative margins for ethanol production this past winter.

The plant accepted its first loads of corn Feb. 18 and had enough corn under contract in March to fill the bins.

By Steve Johnson, Iowa State University Extension Farmers who are dealing with delayed and prevented planting decisions need to keep good records and ...