Leaders of the state’s two corn organizations commended the selection of Barry Dunn as the new president of South Dakota State University. The Board of Regents announced that Dunn, endowed dean of SDSU’s College of Agriculture and Biological Sciences, will become the school’s 20th president. 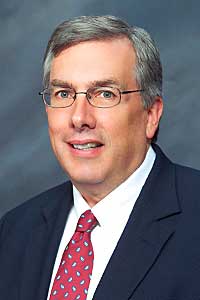 Reno Brueggeman of Miller, president of the South Dakota Corn Utilization Council, said Dunn is sure to be a popular choice among farmers and ranchers.

“He recognizes the importance of agriculture to this state. He’s a good hire for the university, for the agricultural community, and for the entire state,” Brueggeman said. “A national search generated interest from highly qualified candidates across the country, but in the end the best person for the job came right out of our backyard.”

The Corn Utilization Council, which operates a one-cent checkoff program, awarded the university a $2 million endowment in 2010 to assist in attracting and keeping highly qualified ag leaders. Dunn was hired that year as dean of the College of Agriculture and Biological Sciences.

“Since returning to his alma mater nearly six years ago, Dean Dunn has demonstrated the type of leadership skills that can take SDSU to the next level,” Alverson said. “He has such a passion for the university and a vision of what can be accomplished in the years ahead.”

As dean, Dunn administered a $78 million annual budget, which included more than $20 million in grant and contract awards, along with fundraising and development. He first worked in Brookings as an Extension livestock specialist and assistant professor in the Department of Animal and Range Science from 1997 to 2004.

He returned to SDSU after spending six years at Texas A&M University-Kingsville as executive director of the King Ranch Institute for Range Management. Along with his undergraduate biology degree, he holds Ph.D. and M.S. degrees in animal science, all from SDSU.

In his application to the search committee, Dunn shared that he has experienced SDSU from more vantage points than most: as a dean, professor, researcher, student, father, business owner, and resident.

Jim Ristau, an experienced biologist and conservationist who grew up on a family farm, has joined the South Dakota Corn Growers Association (SDCGA) staff ...

Every day is Earth Day for farmers

Each year, on April 22, Earth Day is celebrated in more than 190 countries to raise awareness of the importance in protecting our environment. To farmers, ...