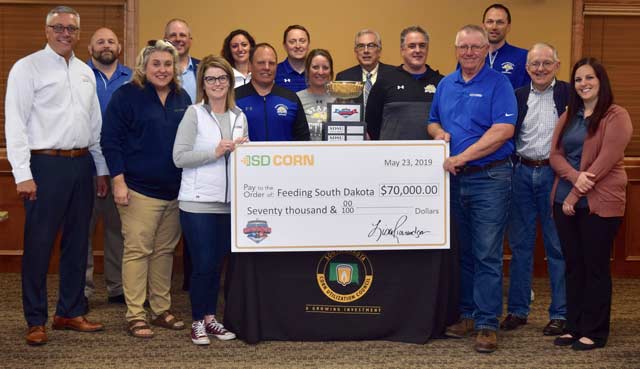 During a special presentation in Sioux Falls, SDSU accepted a traveling trophy for defeating the Univercity of South Dakota (USD) Coyotes 14.5-11.5 in the competition presented by South Dakota Corn. Moments later, Feeding South Dakota officials accepted a $70,000 check to provide meals for families throughout the state.

“When we launched the Showdown Series seven years ago, we could only imagine the way it would grow and what a positive impact it would have. This continuing partnership with the universities and Feeding South Dakota has provided a one-of-a-kind opportunity for our state’s farmers to improve the lives of less-fortunate individuals and families,” Teddi Mueller of South Dakota Corn said. “In addition to generating a significant amount of money to fight hunger, the Showdown Series also raises awareness of the needs in our state.”

Funds for Feeding South Dakota were raised through yearlong activities and efforts of SDSU and USD fans, students, communities, farmers and South Dakota Corn. The Showdown Series is part of South Dakota Corn’s efforts to reach a broader audience, capitalizing on the highly visible rivalry between the state’s two largest public universities. It provides a successful avenue to educate people about agriculture and creates recognition and goodwill for the state’s corn farmers.

The Showdown Series tracks head-to-head matchups and conference championship results in 16 sports and also weighs academic achievements. Each school had a student-athlete grade-point average above 3.2 this past academic year.

“Winning the South Dakota Showdown Series puts an exclamation point on one of our most successful seasons as an athletics program,” SDSU Director of Athletics Justin Sell said. “With the help of our schools’ great fans, we are proud to partner with South Dakota Corn and Feeding South Dakota to use the Showdown Series as a platform to assist those in need throughout our state.”

Throughout each school year, fans can visit www.sdcornshowdown.com to track progress and see point totals. Jackrabbit Sports Properties (JSP) and Coyote Sports Properties (CSP), the multimedia rights holders for SDSU and USD athletics, respectively, spearheaded the initiative between the athletic departments and South Dakota Corn. Both JSP and CSP are properties of Learfield IMG College.

This year’s moisture of epic proportions has been devastating for some parts of South Dakota. The problems actually began last year, according to SDSU ...