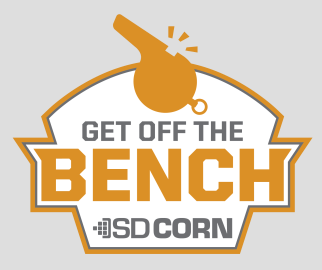 Presented by South Dakota Corn, the South Dakota Showdown Series this year asks fans to “Get Off the Bench” on game day to help raise an unprecedented $19,000 to directly benefit Feeding South Dakota, the Series’ philanthropic organization since inception of the in-state rivalry in 2012. The initiative helps unify the state as the universities and its teams come together to feed hungry families. To match the seating capacity at Dana J. Dykhouse, the $19,000 is anticipated to be reached through a generous $1 donation from each fan attending the November 12 football game. Fans also can donate online at www.feedingsouthdakota.org or on the Venmo account @feeding-SouthDakota. Containers collecting cash donations will be placed at each stadium entrance and concessions stands as well.

“In our state, loyalties are typically reserved for red or for blue, however, this Saturday, it’s all about the color orange to show our dedication to the fight against hunger. We ask both Jacks and Yotes fans to come together this weekend and help us exceed the designated dollar amount earmarked for Feeding South Dakota. That would be a tremendous display of team spirit and one in which many, many families around our state would be forever grateful,” said South Dakota Corn’ Legislative Affairs Director Teddi Mueller.

Both universities are encouraging their fans and the community to “Get Off the Bench” in support of the overall goal to ultimately provide significant funding to Feeding South Dakota. The color orange represents the fight against hunger, which both university athletic programs have teamed up to support. A total of 5,000 fans will receive orange “Get Off the Bench” T-shirts, and the color orange and #farmersfightinghunger will be seen on apparel throughout both sidelines, stands and concourses.

“Jackrabbit Athletics is once again proud to partner with South Dakota Corn and Feeding South Dakota to raise funds and provide a platform for their hunger fighting initiatives,” said SDSU Director of Athletics Justin Sell. “Our fans have a great history of stepping up and providing support for events like this, and I have no doubt this weekend’s large crowd will help meet and exceed the goals set forth.”

USD Director of Athletics David Herbster added, “It is reassuring that in today’s day and age we have student-athletes who are true student athletes and excel in the field of competition and the classroom. The South Dakota Showdown Series is an opportunity to tell these stories, but it also provides us with something greater. It gives both schools the platform to provide the opportunity for our stuent-athletes to give something greater than themselves and make an impact in the community. South Dakota Corn and Feeding South Dakota allow us to make a difference in the state. ”

The South Dakota Showdown Series, won by SDSU last year, operates on a point system in which each school can earn a maximum of 22 points per year based on head-to-head competition between the Jackrabbits and the Coyotes in a total of 17 men’s and women’s athletic events. There is an academic component as well, and the university deriving the most points by the end of the school year will earn bragging rights to the specially designed traveling trophy. Throughout the school year, fans can visit www.sdcornshowdown.com, www.gojacks.com or www.goyotes.com to track progress and see point totals for their favorite team.

“Feeding South Dakota is honored and humbled to be a part of the South Dakota Showdown Series sponsored by South Dakota Corn,” said Matt Gassen, CEO for Feeding South Dakota. “We couldn’t be more proud of the generosity shown to our organization from not only SD Corn, but by the students and staff of these two powerhouse universities, SDSU and USD. It goes to show that great things can happen when rivalries come together for the common good, and in this case, to help end hunger in South Dakota.”

The student bodies of each university are joining up to make this a record-setting year for funds raised. Approximately 40 members of the Lambda Chi Alpha fraternities of USD and SDSU will run the game ball from Vermillion to Brookings, SD – 166 miles collecting donations for Feeding South Dakota in communities along the route. Communities include Gayville, Yankton, Irene, Viborg, Hurley, Parker, Humboldt, Madison. The Greek group is accepting donations at https://www.gofundme.com/lxa-feeding-america-football-run.

According to Jace Jerome Michael, a member of Lamda Chi Alpha, University of South Dakota, “We enjoy coming together each year during a time of intense rivalry. That’s not to say we don’t give each other a fair share of grief regarding respective schools along the way; but, at the end of the day, we both support a cause greater than ourselves.”

Spearheading this initiative with the schools and South Dakota Corn are Jackrabbit Sports Properties and Coyote Sports Properties, the multimedia rights holders for SDSU Athletics and USD Athletics respectively. Both are properties of Learfield, which manages multimedia rights for more than 120 collegiate properties around the country. Other Learfield partners hosting rivalry series include Oklahoma/Oklahoma State (Bedlam Series) and Iowa/Iowa State (Cy-Hawk Series)..

Timely rains helped many South Dakota farmers grow record crops in 2016 and that’s reflected in the results of an annual corn yield contest sponsored by ...

Want to increase your corn yields? Looking for ways to improve your fertilizer program? Is your precision agricultural equipment giving you fits? A new ...