Sweet Corn is the 1% 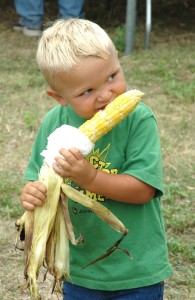 Sweet corn season has finally arrived in South Dakota. Just saying the words, “sweet corn,” can be music to people’s ears and taste buds. But did you know that sweet corn represents a very small portion of the corn grown in South Dakota and throughout the United States?

Sweet corn represents only about 1% of all the corn grown in the United States. The majority (99%) is yellow #2 dent corn, which is fed to livestock, turned into ethanol and high-protein feed, plastics, and thousands of other products. But back to the sweet stuff…

Sweet corn has been a long-standing tradition that dates back to early America as the first record of sweet corn involved the Native American tribe, the Iroquois, giving some to European settlers in 1779. The vegetable’s popularity soon spread throughout the American settlements.

Sweet corn seed hybrids and biotechnology have come a long way in the past centuries, allowing farmers to produce more corn on less land that is also resistant to pests and disease. There are hundreds of varieties of sweet corn with new ones popping up each year.

Sweet corn not only tastes good but includes numerous health benefits including B vitamins, vitamin C, magnesium, postassium, the anti-oxidants zeaxanthin and potassium which are good for eye health, and ferulic acids that can reduce your risk of heart disease and fight cancer. It is also gluten free, low in calories and a good source of fiber. If you are worried about sugar, an ear of sweet corn generally has a third of the amount found in a banana.

Boiled, canned, grilled or frozen, make sure you enjoy one of life’s simple pleasures during each and every short-lived South Dakota sweet corn season.

The burning difference between Ethanol &#038; Gas

With big oil spilling constant non-stop nonsense about American-made ethanol, it’s important for folks to see the facts about renewable fuels for ...

The freedom of the open road on two wheels appeals to the estimated half a million who attend the Sturgis Motorcycle Rally each year in the Black Hills of ...