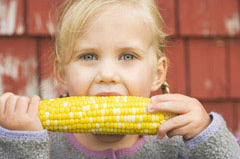 Is there anything better than fresh sweet corn? Debate all you want, but there is no argument during the short time that South Dakotans can get their hands on fresh, local sweet corn.

Corn on the cob, as many American’s call it, is a long-standing tradition that dates back to early America as the first record of sweet corn involved the Native American tribe, the Iroquois, giving some to European settlers in 1779. The vegetable’s popularity soon spread throughout the American settlements.

Sweet Corn seed hybrids and biotechnology have come a long ways in the past centuries allowing farmers to produce more corn on less land that is also disease resistance. There are hundreds of varieties of sweet corn with new ones popping up each year. Sweet corn still only represents around 1% of the total United States corn crop each year.

Sweet corn not only tastes good but includes many health benefits including anti-oxidants and ferulic acids which can reduce your risk of heart disease and fight cancer.

So boiled, canned, frozen or grilled, make sure you enjoy one of life’s simple pleasure during each and every short-lived sweet corn season.

With more and more families continued to be removed from the farm, most kids today have no idea how their food is raised or where it comes from. To remove ...

Renewable Fuel Association’s, Robert White, Director of Market Development is headed to the71st Sturgis Bike Rally this week, but he’s not on vacation, ...