Thune steps up for SD on PP 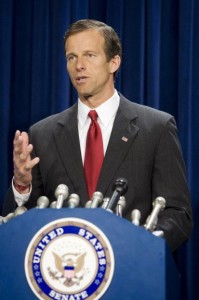 On Thursday, June 30, 2011, the United States Department of Agriculture’s Risk Management Agency revised its prevented planting policy for farmers in parts of the prairie pothole region due to flooding.

United States Senator John Thune of South Dakota led the charge for his home state as his request for a change in federal prevented planting policy was approved. The change in policy would extend the preventive planting rule from three to four years making most producers eligible again in 2012 in case another round of flooding occurs.

“After enduring another extremely wet spring planting season, producers in Northeastern South Dakota have not been able to plant tens of thousands of acres to corn, soybeans and other crops for the third consecutive year,” said Thune. “I applaud RMA’s modifying this policy change from what was originally proposed to ensure that producers in this region will be eligible for another year of crop insurance prevented planting assistance on otherwise ineligible acreage in 2012.

For a little history on this matter, in 2010, RMA proposed to change its policy on prevented planting eligibility due to parcels that were consistently enrolled year after year. A three-year window was announced to give farmers an opportunity to produce a quality crop in order to remain eligible for prevented planting in case of a natural disaster like flooding. Thune’s request came after South Dakota and other neighboring states experienced continued unusual weather patterns that have been disrupting the plantings of otherwise quality farm land. This additional year of coverage would qualify 250,000 additional acres in Northeastern South Dakota next year alone, providing much needed relief.

“We appreciate Senator Thune pressuring USDA and RMA to consider using 2008 planted acres when determining eligibility for prevented planting in the 2012 crop year,” said Lisa Richardson, executive director of South Dakota Corn Growers Association. “Prevented planting coverage is critical to keeping many farming operations with spring-planted crops in Eastern South Dakota in business when they are unable to plant and harvest a crop.”

A modification to a federal crop insurance program comes as a welcome relief to South Dakota farmers whose livelihoods are being jeopardized by several ...

Knee high by the 4th of July?

Knee high by the 4th of July…or so the old saying goes. The old “knee high” adage meant that if your corn reached the height of your knee by Independence ...