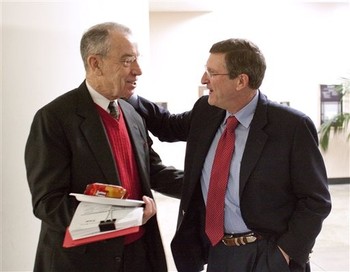 “Our nation is spending more than $850 million every day on imported energy,” Conrad said. “Imagine what it would be like if we spent that money on energy from the Midwest instead of the Middle East? We need to do more to boost domestic energy production, especially from alternative fuels such as ethanol.”

More specifically, this Act would reduce tax incentives for ethanol but extend VEETC at a lower level through 2016. The act would also improve current blender pump installation tax credits and keep in place the incentives for cellulosic and small ethanol producers to ensure investor confidence in the private sector.

“The debate over energy tax policy should be comprehensive and include all sources of energy. With this bill, ethanol has taken the lead in looking forward. No other energy sector has stepped up to do that in the current legislative debate,” Grassley said.

Reforming biofuel policies are extremely important moving forward as ethanol currently represents 10% of the nation’s fuel usage, but will require an increase in blender pump infrastructure and flex fuel vehicles in order to continue decreasing America’s dependence on foreign oil.

“We’ve seen what ethanol can do, and the sky is the limit as we move to the next generation and cellulosic ethanol.”

Unfortunate weather may be putting the circumstances in South Dakota lightly as our rural residents deal with washed out roads, flooded fields and cold ...