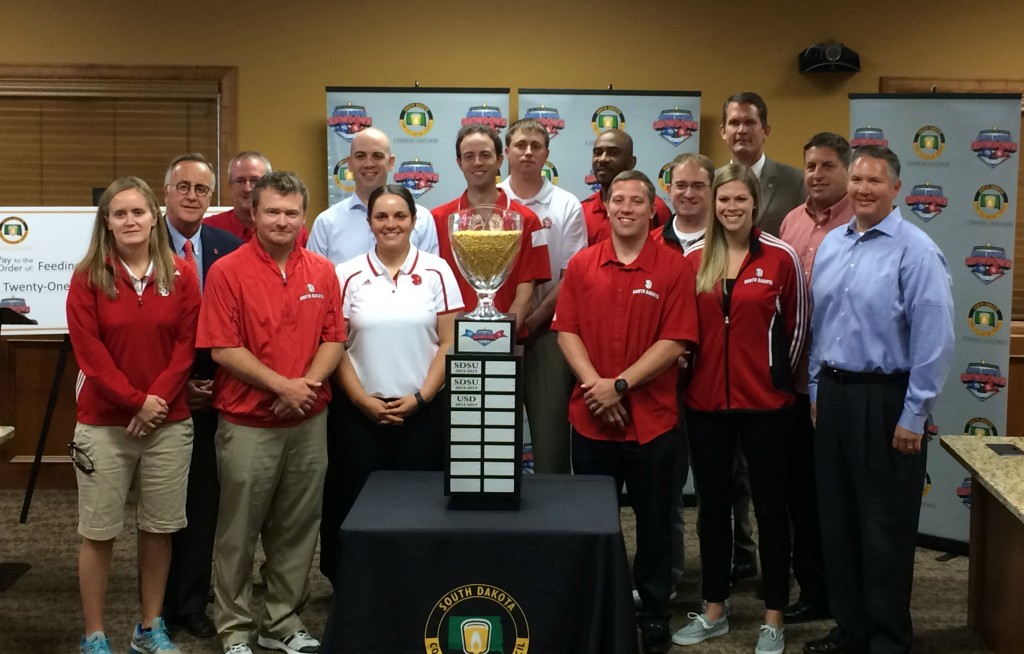 Coyotes Top Jacks 14-13 in a Tight Race for Bragging Rights of the Season-Long, In-State Rivalry

South Dakota Corn Utilization officials announced today the University of South Dakota is the 2014 -15 winner of the “South Dakota Showdown Series”, a point-based, athletic and academic competition between the two in-state university rivals.

The third year of the Showdown Series did not disappoint, with the battle lasting all the way through the final event of the 2014 -15 academic year. The Summit League Track and Field meet played host as the last athletic competition between the two schools, with USD nabbing two points to take an 11-10 overall lead.

Both universities succeeded in the academic achievement portion of the competition, earning a maximum of three points toward the final total for all student athletes maintaining a cumulative grade point average above 3.0. Presented by South Dakota Corn, the Showdown Series is structured on a point system in which each school can earn 24 points per year based on head-to-head competition and conference championships between SDSU and USD in a total of 17 men’s and women’s sports. For a complete breakdown of point totals against the sport won by the respective university in the 2014-15 year, visit http://sdcornshowdown.com/.

“The South Dakota Showdown Series shines a light on the exceptional student-athletes that represent our great state,” said University of South Dakota Director of Athletics David Herbster. “We are thankful and proud to partner with the South Dakota Corn Council in recognizing the academic and athletic achievements of our athletic programs as well as the philanthropic efforts to feed many South Dakotans.”

“This rivalry has flourished since these universities made the move to Division I and it’s been nice to see the great show of sportsmanship from both schools. What’s really impressive is that these athletes are also leaders in the classroom,” said Corn Council President Reno Brueggeman. “And although the universities are rivals, they’re partners when it comes to fighting hunger through their commitment to Feeding South Dakota. We can all be proud of them for that.”

“We continue to be blessed by our partnership with the South Dakota Showdown Series and South Dakota Corn,” said Matt Gassen, Executive Director of Feeding South Dakota. “The support of these two great universities, their administrations, alumni, fans and student athletes is so amazing. This year’s gift of $21,000 raised during each of the head-to-head athletic contests and matched by South Dakota Corn will help provide over 100,000 meals to struggling families across our state,” Gassen said. “It is so rare that in the midst of athletic competition there are so many caring people who are willing to provide assistance to those who are facing life’s greatest challenges.”

Agriculture has always been South Dakota’s number one industry, but now the state has begun to receive added national recognition with the U.S. Department ...