What will happen to South Dakota&#8217;s corn crop? 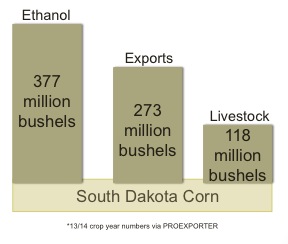 South Dakota farmers harvested the state’s largest corn crop on record in 2013, but what happens to all of that corn? Who will use it? Where does it go?

South Dakota has three primary markets for its corn: ethanol, exports and livestock.

Helping to feed the world is something all farmers take pride in. 273 million bushels of this year’s corn crop will leave South Dakota. While some will be purchased in other states, most will be shipped overseas to predominately Asian countries. Another major export related to corn is distillers grain; 2.193 million metric tons will leave the state this year.

The third primary market is another South Dakota value-added opportunity, livestock. Feed and residual use will consume 118 million bushels of this year’s crop. Actual feed use in state will total approximately 57 million bushels. Below is an estimated corn consumption breakdown for the 13/14 crop from the state’s different livestock sectors:

One feed source often forgotten is the ethanol byproduct, distillers grain, which has become extremely popular among cattle feeders due to its high efficiency compared to corn and soybean meal. Around 567,000 metric tons will be fed in South Dakota this year displacing the need for 22 million bushels of corn. This stat debunks the ethanol myth “food vs. fuel” – folks need to understand that ethanol produces “FOOD and FUEL.”

It truly was an amazing year in crop production. Being able to provide food, feed, clean fuel and fiber to the world’s growing population of seven billion and counting is something that all South Dakotans should take pride in.

Steve Masat, who farms southeast of Redfield, has joined the South Dakota Corn Growers Association board of directors. He will represent District 6, which ...

Protecting and enhancing the land is a priority for all farmers as it is the lifeblood of their operation. A great way to improve soil is by planting ...