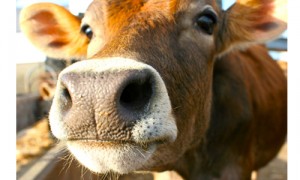 What happens to South Dakota corn? Where does the 595 million bushels harvested in South Dakota during 2010 go?

Much of South Dakota’s corn goes to feed livestock. Even as agriculture has evolved and progressed, using corn as a feed source is still one of the best ways to add value to corn as it grows with the animals. In South Dakota, livestock would include cattle, hogs, turkey, chicken, sheep, bison and other various animals.

“Even with all of the other uses of corn being developed, using it to produce livestock is always going to be a great way to add value to the crop,” said South Dakota Corn Utilization Council president and St. Lawrence farmer and rancher, David Fremark. “I get a lot of personal satisfaction walking through the butcher department at our local grocery store knowing that my family helps produce the best-tasting, highest quality meat in the world.”

Corn demand for livestock feed has been relatively flat over the past decade due to more efficient feeding and the replacement of corn with dried distiller grains (DDG’s), a co-product of corn ethanol. But without a doubt, corn will continue to play a major role in nourishing livestock in South Dakota and around the world which provides protein and vitamins for our planet’s vastly growing population.

American Agriculture: One of the many things to be thankful for

As Americans sit down this Thursday for a bountiful feast, let’s remind each other of the many things we have to be thankful for. We are truly blessed in ...