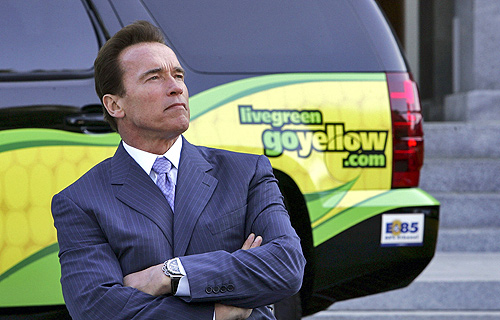 The money was turned down because of the group’s policy concerns about ethanol.

“Ethanol is a key fuel in our move away from petroleum dependence,” said Tutt, the former No. 2 in the California Environmental Protection Agency. “If we put the infrastructure in today, then we are closer to being prepared for when cellulosic ethanol is available.”

Mike Lewis, chief of Pearson Fuels, said, “Dependence on foreign oil is the result of 1,000 little decisions and a few big decisions,” he said. “This was a big decision.”

Paul Wuebben, a clean fuels officer for the South Coast Air Quality Management District, urged the council to accept the dollars. “Ethanol is not perfect, he said, but its wider use would reduce dependence on gasoline and remove pollutants from the air.”

California has over 500,000 flex fuel vehicles.

“The infrastructure created by the ethanol stations could evolve over time to accommodate fuels made from other stocks. Stations could also be adapted for electric/flexible-fuels hybrid vehicles that are expected to become more popular on the market,” Wuebben said.

Last year there were a total of 1,950 gas stations offering higher blends of ethanol in the United States…a total of six are located in the Southern California Region.

You would think California (who has a projected 2010 state budget deficit of $25 billion) would be interested in $11 million that would generate jobs, create a cleaner environment and take a stride towards energy independence…but I guess that’s against their policy.

The ethanol industry is currently awaiting an EPA decision that would move the conventional ethanol blend limit from E 10 to E 15. A decision is expected ...

Would you care to see the power of social media? Go ahead and check out the Facebook Page for Yellow Tail Wine. If that doesn’t impress you, do a search ...