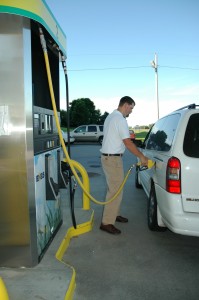 Right now in America, fuel consumers are facing near $4/gallon gas prices and yet are still mandated to use 90% gasoline in their tanks. Americans are essentially being held hostage to OPEC’s rising oil prices. Sure those with flex-fuel vehicles can use up to an 85% ethanol blend but an overwhelming majority of the vehicles in the U.S. are not flex-fuel. The sad part is that own automakers are resisting to produce additional flex-fuel vehicles which in turn limit the consumers choice of using higher blends of domestic, clean-burning, alternative fuels like ethanol.

More flex-fuel vehicles and ethanol blender pumps are vital to not only the future of biofuels, but our nation’s national security. As our countries leaders have been saying since President Nixon, America has an ugly dependence on foreign oil and it’s not getting any better. Today, America has 2% of the world’s oil and demands 25% of it. The U.S. paid 330 billion in 2010 for foreign oil. Just last week, President Obama called for a reduction of foreign oil imports by 1/3 by the year 2025. But in order to reach that goal, we will need more than words but a commitment in national policy.

Other ways of increasing consumer choice would be increasing the minimum blend for certain vehicles. This past fall, the EPA ultimately ruled that blend E15 (15% ethanol and 85% gasoline) is safe for use in all automobiles 2001 or newer. E15 would not be a mandate but a choice. The problem is that congress has blocked the funding for implementation of the new blend delaying its installation into the market.

In order to accomplish our future energy goals the gasoline mandate must be removed, ethanol infrastructure must be expanded and consumers must be given a choice.

During a press conference from Georgetown University on Wednesday morning, President Barack Obama laid out his administration’s “Energy Security” ...