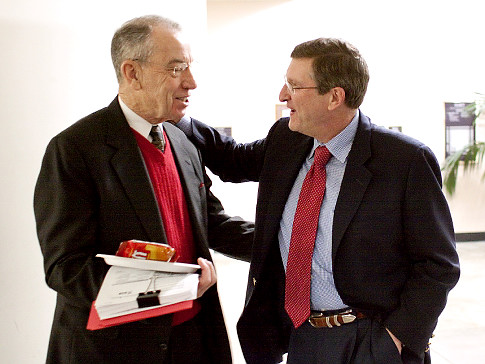 “We are pleased to see that both the House and Senate understand how important the tax credit is to our industry. We look forward to working with them to pass this legislation,” said SDCGA Gary Duffy, a grower from Oldham, S.D.

South Dakota is very fortunate to have legislators that support the biofuels industry which is vital to our state. Sen. John Thune and Sen. Tim Johnson are co-sponsors for the Green Jobs Act while Rep. Stephanie Herseth-Sandlin is a co-sponsor of HR 4940.

There is plenty of concern over this legislation after a recent study by ENTRIX revealed that without these tax credits, approximately 112,000 people would lose their jobs nationally with about 8,000 of those being in South Dakota. A majority of these jobs reside in rural America and this sort of job loss would be devastating to small communities.

The biodiesel tax credit is a perfect example. Since its expiration on January 1 of this year, 29,000 people have lost their jobs and 23,000 more are at risk.

Besides the threat of job loss, corn prices would likely take a hit of about $.30 per bushel because of a lack in demand.

Last year, the ethanol industry returned $3.4 billion to the Federal Treasury above the cost of the tax credit, which does not figure in the taxes paid on the state and local level.

Conrad said, “Our country is in serious danger because of skyrocketing energy costs. This growing crisis demands urgent action. We must be committed to coming together in a bipartisan way to lessen our dependence on foreign oil, while aggressively pursuing alternative sources of energy such as biofuels. Extending these tax credits is a step in the right direction.”

Informational meetings on the Ethanol Blender Pump Grants available in South Dakota will be held at two locations this week: Wednesday, April 21, 3 p.m. ...