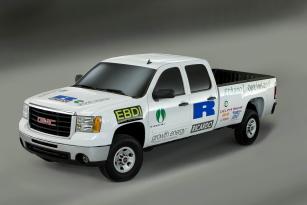 Ricardo Inc. made the ethanol community proud yesterday when it released its new Ethanol Direct Boost Injection engine at the Washington Auto Show. The engine is the first of its kind, using technology designed for diesel engines but taking advantage of the ethanol fuel properties.

Ricardo put their engine in a one ton GMC pick-up as a test model for the auto show. The 3.2 V6 will be able to substitute any gas or diesel motor without losing performance or power.

“We think this could replace conventional engines, and could even replace diesels,” says Kent Niederhofer, president of Ricardo.

The optimum blend for the EDBI is between 30-50% ethanol, but can run on any blend of ethanol or regular gas. That fuel blend is becoming easier to find with the increase in ethanol blender pumps across the country. 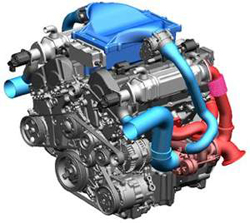 “People are likely to be amazed with the performance and fuel economy that can be delivered from a comparatively small displacement engine running on a renewable fuel such as ethanol,” said Rod Beazley, director of the Ricardo Inc.

Diesel Trucks usually cost around $8,000 more than conventional gas and the EDBI will weigh around 400-500 pounds less while maintaining the same torque and towing capabilities.

Advancements like the EDBI are solutions toward America lessening its dependence from foreign oil and strengthening its economy.

The State of Clean Energy Address

Wednesday night, millions of people watched President Barack Obama give the annual State of the Union Address and he touched on some great topics: jobs, ...

Why is Everyone Ripping HFCS (High Fructose Corn Syrup)?

Right now in the United States more emphasis is being placed on health care than ever before. This seems to make a lot of sense since America has an ...