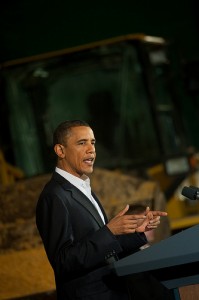 President, Barack Obama, has been touring through the Midwest the last couple of days talking about rural economic development. On Wednesday, he toured an ethanol plant in Macon, Missouri and stressed the important role that ethanol and other biofuels have in boosting rural communities.

“There shouldn’t be any doubt that renewable, home-grown fuels are a key part of our strategy,” said President Obama.

With nearly 400,000 employee’s nationwide working in the ethanol industry alone, those good paying jobs are extremely important in rural areas where 20% of the nation’s population live.

The President made sure to note that he is no stranger to ethanol.

President Obama went on to say that now is the time to reduce our dependence on imported oil.

The President also acknowledged that ethanol has benefits beyond being an economic booster.

“I believe in the potential of what you are doing right here to contribute to our clean energy future.”

Is ACRE the right safety net for you?

A free ACRE Webinar will be held Thursday morning on May 6, from 7-8 a.m. CDT. The webinar is designed to help growers assess how well the program ...

Spring is always a busy time on the farm with calving season coming to an end and farmers racing to get into the field, there is little time to think ...