Planting season gets off to a good start

South Dakota farmers are off and running.

A year after planting was an impossible task in many parts of the state because of flooding, planters are rolling across fields in a widespread area.

“This is as close to perfect as it gets,” Ross Hanson of Garretson said by phone as he made a pass across a field with his corn planter on April 24.

A year ago, Hanson wasn’t able to start planting until May 15 and then called it quits in mid-June. He was one of the fortunate ones, able to plant 94 percent of his ground in a year when more than 3.8 million South Dakota farm acres were unplanted, the highest total in the nation.

The difference between last year and this year is like night and day. As of April 26, South Dakotans had planted 8 percent of their corn, according to the National Agricultural Statistics Service. That total is expected to take a big jump when next week’s report is released. Last year, the percentage was a big fat zero as late as May 5. 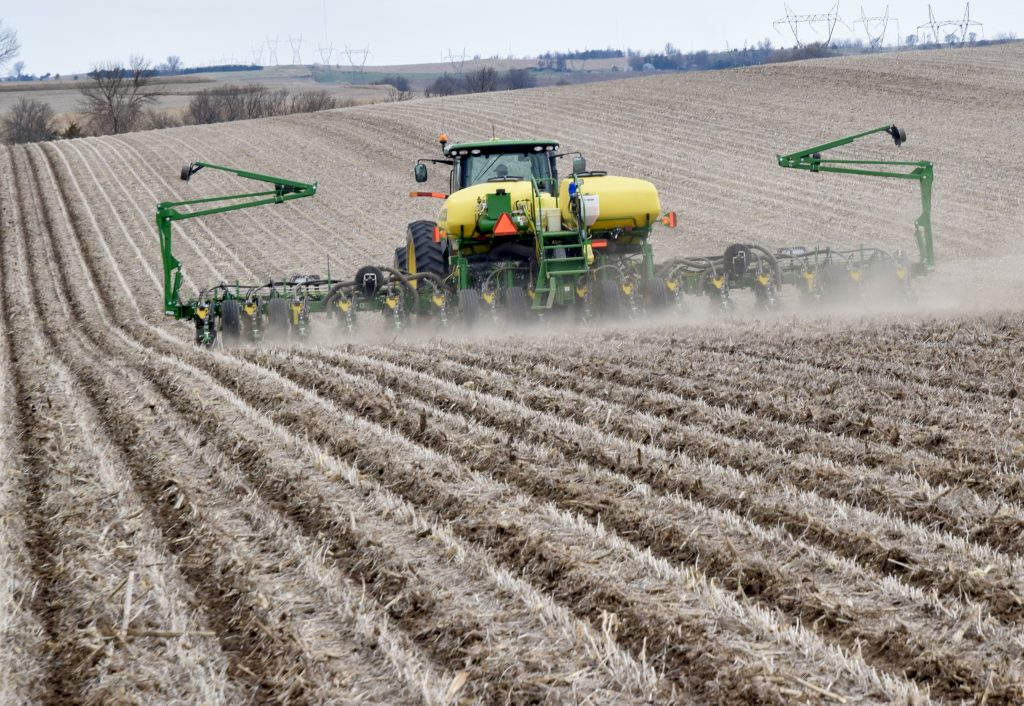 Ross Hanson plants corn in a no-till field near Garretson.

It’s still early and the weather can change quickly, but planting season is off to a good start —better than most of us expected months ago.

Robert Walsh of Elk Point, president of the South Dakota Corn Utilization Council (SDCUC), said everything seemed to fall into place. That included a milder winter with less moisture, a nice snowmelt, no major rainfall in March and a near-perfect spring thaw.

“Everyone was getting the itch. The disaster of last year made everyone want to get started as soon as possible,” Walsh said. “Things are off to a really good start. I’m very optimistic compared to where we were sitting last year.”

Walsh started planting corn two weeks earlier than last year when he began May 5 and quit four days later because of flooding. He replanted half of that June 6 and 7.

The region received a couple of light showers amounting to .01 to 0.25 of an inch in recent days, but not enough precipitation to cause serious delays. He expects to finish planting corn April 30 and start soybeans the next day.

The outlook is also promising west of Gettysburg, where Mike Cronin has finished planting 2,200 acres of spring wheat.

“That’s huge to get that much done in a hurry,” he said.

Cronin actually started planting spring wheat on April 10, but had to take a break due to snow and rain. Because the soil was cool, the oats he planted earlier and the first field of spring wheat didn’t start emerging until the past couple of days. He expects to start planting corn on April 30 now that the soil temperature is close to 50 degrees.

He also grows sunflowers but will likely wait until close to Memorial Day to begin planting those because a late frost would kill them.

Back at Garretson, Hanson is 90 percent done planting his 800 acres of corn and plans to start on soybeans at the end of this week.

“We’re moving right along,” he said.

He attributes much of his planting success to the fact all of his ground is no-till, a practice that his dad, Stan, started with soybeans in the early 1980s and expanded to corn in the mid- to late-’80s. By not disturbing the soil, structure seems to hold, he said. When the ground is saturated, the water seems to drain away.

Ross Hanson said when he does soil testing, he’s able to push a soil probe all the way down into the ground with one arm in no-till fields.

Unfortunately, conditions aren’t ideal everywhere. Grant Rix of Groton, vice president of the SDCUC, said this morning that ground is “completely saturated” throughout much of eastern Brown County. His farm received 0.6 inch of rain in a 24-hour period.

“We’re about four days away from planting corn if the weather cooperates,” he said. “I would guess there will be some pretty serious planting going on then.”

Rix estimates that only about 5 percent of the corn in that part of Brown County has been planted.

As always, continued progress in planting will be dependent on the weather, but for the majority of South Dakota farmers, things are off to a successful start.

Every day, it seems that we hear or read news reports about these “uncertain times.” But when is there ever really certainty? That’s particularly true in ...

Farmers had a lot on their minds heading into spring. Coming off of a flood-ravaged 2019 growing season, low grain prices and the prospect of fields being ...