South Dakota State University versus the University of South Dakota, the rivalry relished by many, forgotten by none, is back. This long-time rivalry with its rich history and countless memories dates back to 1889, which makes South Dakota Corn proud to sponsor the newly unveiled “Showdown Series.”

“South Dakota Corn is excited to be a part of this reborn rivalry,” said Chad Blindauer, President of the South Dakota Corn Utilization Council. “Our organization has been exploring opportunities to expand our reach to consumers across the state. Teaming up with these academic giants make great sense. Not only to support the universities, but spread a powerful True Environmentalist message to their large fan base. This will allow us to educate South Dakotans on how farmers grow the food, fuel and fiber for a growing population.”

The Showdown Series will be a yearlong competition between the two universities with the winner being determined by a custom points system from each head-to-head athletic competition and academics. The winning university will be awarded a traveling trophy (pictured below) after the school year is complete.

This year’s Showdown Series is already underway with the University of South Dakota Coyotes currently leading South Dakota State University 3-2 after their recent volleyball victory last week. Next up in the Showdown Series is the football game (worth 2 points), which will be the two teams’ first meeting on the gridiron since 2003 in Vermillion. The game will take place in Brookings on Saturday, November 17 at 2:00 PM. 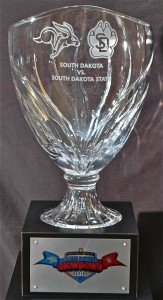