When a doctor prescribes fear 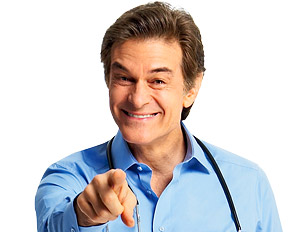 Let’s not beat around the bush. Dr. Oz is an extremely successful television host, but he is also a hack when it comes to health facts. This is especially true when he talks about GMOs and biotechnology.

Yesterday, without any data or research on his side, Dr. Oz orchestrated a monstrosity demonizing a herbicide (DOW Enlist, currently awaiting EPA approval) which he called a, “GMO pesticide,” by creating false fear and emotions with no sources about product whatsoever before a national viewing audience.

First off, there is no such thing as a “GMO pesticide.” In fact the product he is targeting isn’t a “pesticide” at all, it’s a herbicide meant to stop noxious weeds from growing in corn and soybean fields. Perhaps the fact that Dr. Oz can’t identify the difference between a herbicide and pesticide ought to demonstrate just how misinformed the man is on this matter.

A second point is that Dr. Oz says 2-4D was an ingredient used in Agent Orange. While this is true, it was not the chemical component that caused the destruction in Vietnam. In fact, 2-4D is one of the most common chemical lawn treatments in the United States used to knock out weeds and has been for decades.

Here are some facts that Dr. Oz missed on GMOs. GMOs have allowed farmers to grow more food per acre while using fewer inputs helping to reduce agriculture’s environmental footprint while meeting increasing demands. Since GMOs were introduced nearly 20 years ago, applications of pesticides have declined dramatically. Finally, GMOs have been proven to be safe through thousands of independent studies.

This isn’t the first time Dr. Oz has attempted to misguide his viewers about GMOs, as he and a guest who had been rejected form the science community claimed that GMOs were the reason for an increase in diabetes, allergies and cancer among many other health problems. Of course they made these claims with no sources or accepted scientific studies to show. During that same episode, Oz went as far as to use a “rat study” from France that had been denounced by hundreds of scientists from across the world.

To expose the man for who he is, Dr. Oz was drilled this summer before a United States congressional committee about the products and practices he preaches to his audience.

Dr. Oz’s response to the committee: “I actually do personally believe in the items which I talk about on the show. I passionately study them. I recognize that often times they don’t have the scientific muster to present as fact.”

No science or facts? And he calls himself a doctor? Need we say more?

For more on the product DOW Enlist, read: Enlist Duo Herbicide (2, 4-D): The Rest of the Story

We also encourage you to share the facts about Dr. Oz with your family, friends, neighbors and others. For more on that, read: Dr. Oz, Again? Can Someone Hand Me the Remote

While corn harvest has started in the southern to central areas of the United States, South Dakota farmers are in the middle of silage season. Choppers ...