Editor’s note: There’s an outstanding lineup of speakers on tap for the South Dakota Corn Growers Association’s 33rd annual meeting, which will be held Jan. 19, 2019. Each month, we’ll profile one of them. This time it’s Ed Duggan, a senior risk management specialist with Top Third Ag Marketing.

This fall, many farmers will be tempted to pay elevators to store their grain until commodity prices rebound. Ed Duggan doesn’t think that’s a good idea. 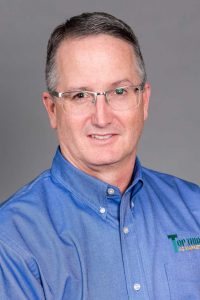 “We don’t believe in storing grain. We’ve always believed at Top Third that storing grain is a losing game. If you’re storing on the farm, that’s different – you have the bins,” he said. “But to pay for commercial storage is not a winning play. We’d much rather have guys sell the crop, just spend 10-12 cents, which is probably cheaper than what you’re going to pay to store the grain, and look to re-own those bushels in case we do get a run on the prices.”

When Duggan comes to Sioux Falls to share his expertise at the SDCGA’s annual meeting, he’ll bring along more than 30 years of experience. He joined Top Third Ag Marketing in 2007 as director of operations after spending more than 21 years on the grain floor at the Chicago Board of Trade. He was grain floor manager for LFG, LLC from 1992-2000 and floor manager at Iowa Grain Company from 2000-2007, where he was introduced to Mark Gold and his risk management program. Duggan went to work for Top Third, and after eight years he transitioned into his current role as senior risk management specialist.

Duggan said he was drawn to his career because of the fast pace of the markets and the trading floor. He didn’t grow up on a farm, but took classes through the CBOT and learned the ins and outs of the business from his mentors.

Looking ahead to this year’s harvest, Duggan noted that the 2016 corn market reached its “stone-cold low” on Aug. 31 and last year the Aug. 31 low held until the October crop report. He said the reason for that is that many farmers had delayed-price contracts that gave them pre-storage on corn until Aug. 31.

They had to make up their minds to either pay for storage or dump their grain, he said. Large quantities of corn came into the marketplace, and the market hasn’t been able to hold those loads.

Duggan said Mark Gold, Top Third’s managing partner, taught him something that he still believes. “Every year, the American farmer is going to have at least one opportunity to market his grain at profitable levels. He just has to be willing to pull the trigger when the opportunity presents itself.”

Top Third uses options as risk management. He said that takes emotion out of the game and farmers know what their risks are up front.

But times have changed and technology has played a big role.

“Look how fast a farmer can get the crop in the ground and how fast he can harvest it,” he said. “Look at the seeds, the hybrids.”

Waiting to market grain until the harvest is complete can be a costly decision. He noted that this year is a typical example. “We made our highs in the end of May and then they fell out of bed.”

There’s one farm strategy that could be different this year. Most years, farmers sell their soybeans off the combine to pay bills and then they store corn. This year, “with an 8 in front of beans, are guys going to sell corn and store beans to wait for higher prices, waiting until something gets worked out with the Chinese?”

Trade Is Vital to South Dakota

Trade wars, NAFTA, tariffs and more tariffs. Mexico, Canada, China and the European Union. Trade has been a burning issue in 2018, and many South Dakotans ...

What would South Dakota look like without corn production? What value does corn production truly bring to the state? And, more importantly, why should ...