Editor’s note: There’s an outstanding lineup of speakers on tap for the South Dakota Corn Growers Association’s 33rd annual meeting, which will be held Jan. 19, 2019, in Sioux Falls. Each month, we’ll profile one of them. In this edition, we talked with Floyd Gaibler. 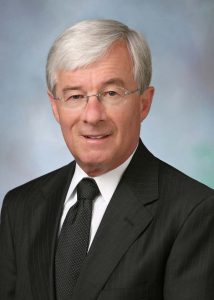 As director of trade policy for the U.S. Grains Council, Floyd Gaibler hasn’t had many dull moments this year. NAFTA negotiations, the U.S.-China trade war and an onslaught of tariffs have kept things interesting, to say the least.

Ideally, if Gaibler had his wish, by the time he speaks in South Dakota, many trade issues would be settled. His hopes:

“Those would point that trade policy is moving in the right direction and we’re trying to secure positive results, particularly in new markets where we don’t have trade agreements,” he said.

He would like to see the Trump administration complete a successful NAFTA agreement because other countries are looking at how negotiations are going and that’s likely to sway their level of interest and desire to negotiate with the U.S.

“We’re obviously a very important and attractive market, but these negotiations are difficult,” Gaibler said. “If the negotiating environment is difficult between the U.S. and our best customers and closest neighbors, that gives other countries pause in terms of how deeply they want to get into a bilateral agreement.”

Another important issue is passage of a new farm bill. Many people might not realize how important that bill is to U.S. trade and day-to-day operations at the Grains Council, a nonprofit organization that promotes the global use of U.S. corn, sorghum, barley, ethanol, distillers grains and related products.

The 2014 Farm Bill contained a trade title, as did previous farm bills. That title included funding for the Market Access Program (MAP) and Foreign Market Development (FMD) program to expand exports globally. Gaibler said both programs have strong bipartisan support and are included in both the Senate and House versions of a 2018 Farm Bill that stalled in Congress. Without a new farm bill or an extension of the 2014 version, that funding ends.

That would force the Grains Council to use reserve funds to temporarily support its programs and administrative staff in offices around the world. If funding isn’t restored, it would have to cut some programs and close some foreign trade offices.

This fall, thousands of hunters from all over the world will be stepping into South Dakota fields to flush our famous state bird—the pheasant. It is a ...

South Dakota farmers produce about 800 million bushels of corn a year. Half of that is used to make ethanol and nearly one-fifth is fed to livestock. But ...